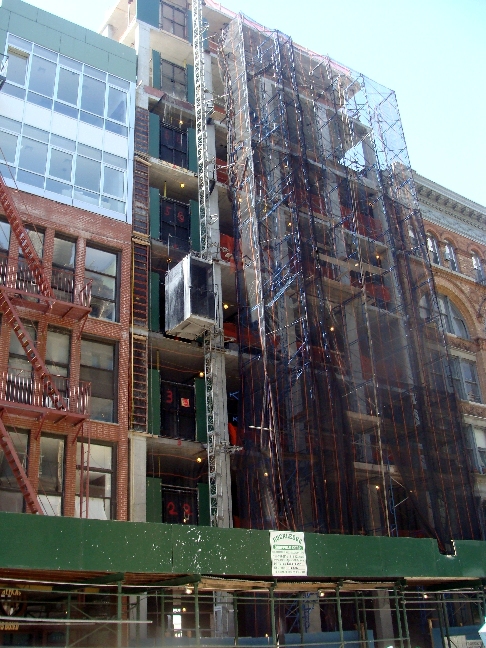 Application:
A vacant lot with a building under construction. Application is to amend Certificate of Appropriateness 09-6382 (LPC 09-3588) for the construction of a new building.

This application is closed. Application approved on May 11, 2010.

Status as of May 4th, 2010:
The building approved in September 2008 had only partially been constructed when both the owner and architect of the building changed. On May 4th, 2010, a public hearing took place at the Landmarks Preservation Commission, at which the new owners proposed to alter the originally-approved design, thereby modifying the original permit.

Proposed changes to the formerly-approved design of the front facade included:

1) Changing the facade material from limestone to stacked bluestone
2) Removing the white bronze shutters
3) Enlarging the windows, changing them from multi-pane to fixed single-pane, and setting them back 16′ from the primary facade. The windows frames would be made of European spruce (a light wood), which would be lined with tinted black glass on the exterior side. Set just in front of each window (off to one side) would be a narrow vertical band of stainless steel cable strings, through which greenery and plantings would grow.
3) Removing the large fixed awning over the ground floor and replacing it with a single, steel awning just above the door that would be covered in greenery
4) Removing the approved temporary window planters and replacing them with fixed, carved bluestone window planters
5) At the penthouse floor, creating a front wall of alternating glass and concrete panels

Proposed changes to the formerly-approved design of the rear facade included:

1) Adding a triangularly-shaped, poured concrete and balcony to each floor. Balconies would have opaque glass railings and teak flooring and would project four ft at their widest point (western side) and two ft at their narrowest (eastern side). The architect proposed to install planters on each balcony, so that ivy and other plantings would create privacy barriers.
2) Changing the material of the opaque western side of the rear facade from stucco to concrete
3) Changing the rear glass facade. Originally, one large piece of glass had been approved for each floor. The proposal was to instead install multiple glass panels to create sliding doors/windows.
4) Running a bluestone chimney up the center of the facade

The applicant also proposed reducing the bulk of the rooftop mechanicals (removing the bulkhead in the southwest corner and the electrical room in the northeast corner, and reducing the northwest bulkhead by two ft). The building’s height and floor area would remain essentially the same, except where the bulkhead massing has been reduced.

At this hearing, the Commission did not vote to approve or deny the application, but rather asked the applicant to return at a later date with revisions. Most Commissioners had no issues with the rear proposal (including the balconies). They did however have concerns about the proposed front facade appearing too somber and monotonous. They asked that the applicant consider a way to break-up the potentially overwhelming effect of too much bluestone. In order to do this, they suggested he might consider creating a more robust ground floor to counteract the weight of the bluestone, or introducing other materials into the proposed front facade, especially around the windows.

Status as of September 30th, 2008:
On this day, the Commission approved a proposal for the first new building in the newly-designated NoHo Historic District Extension. Photos of the 2008-approved design are below, including a photo taken from Bleecker Street showing the partially-constructed building.

2008 Designation Report, published by the Landmarks Preservation Commission when they designated the NoHo Historic District Extension