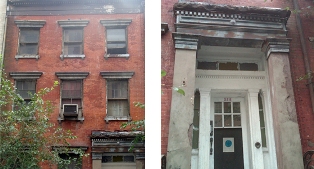 328 and 326 East 4th Street, located between Avenues C and D, were two miraculous survivors whose histories reflect the East Village’s remarkable transformation over the past two hundred years. Village Preservation had unearthed incredible documentation showing the house’s original owner built the first steamship to cross the Atlantic Ocean (nearby Avenue D was the East River’s edge, which in the early 19th century was full of working piers before shipping activity shifted to the wider and deeper Hudson); that in the late 19th century these houses were transformed from homes of successful merchants into tenements to house the waves of immigrants moving into the area; that in the early 20th century 326 and 328 East 4th Street were converted to house a Hungarian Synagogue, as the Lower East Side became the largest Jewish community in the world; and that in the 1970s, they became the home of the Uranian Phalanstry, a self-described “anarchist utopian commune for practitioners of art and cosmology,” which still resides there today.

Amazingly, through all of these changes, the architectural detail of these 170-year-old houses remained remarkably intact. In spite of this, however, the City refused to consider our petition to landmark the structures, which a developer then proceeded to unrecognizable alter and disfigure.