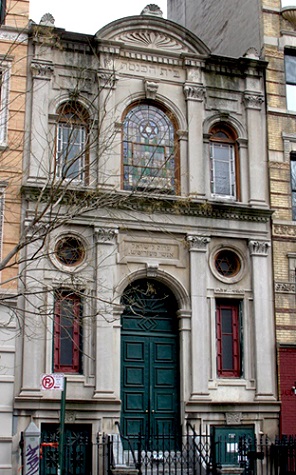 The Adas Yisroel Anshe Mezritch Synagogue, or Congregation Mezritch Synagogue, was founded in 1888 on the Lower East Side, and constructed its current temple at 415 East 6th Street in 1910. The handsome neo-classical building was one of the Lower East Side’s many “tenement synagogues,” so named because they filled narrow lots sandwiched between tenements and served the poor immigrants who populated the surrounding buildings.

While a few such tenement synagogue buildings remain in the East Village, including the landmarked former Beth Hamedrash Hagadol Anshe Ungarn Synagogue at 242 East 7th Street, Congregation Mezritch Synagogue is the sole remaining (partially) operating tenement synagogue in the East Village. In 2008 leadership of the congregation planned to demolish the building with developer Jared Kushner and build a new building on the site. Many members of the congregation, Village Preservation, and many local and Jewish community leaders opposed the plan, which was dropped. We got the building landmarked in 2012 as part of the East Village/Lower East Side Historic District. The congregation converted much of the building to residential use while the synagogue continues to operate in the basement floor.