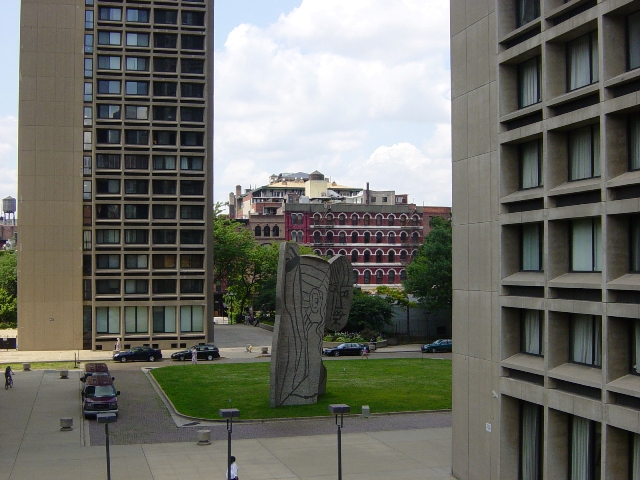 The Silver Towers complex consists of three 30-story towers built in the 1960s as part of an urban renewal project; two towers house NYU faculty, while the third, 505 LaGuardia Place, is an affordable residential co-op for local residents which NYU was required to build as a giveback to the community to replace housing they destroyed to make way for the complex.

The Silver Towers superblock complex was assembled in the early 1960s by Robert Moses and given to NYU for “slum clearance” and expansion of their campus. However, due to the outcry over the loss of housing on the site, NYU was required to erect an affordable residential co-op within the development to offset the loss to the community. Up-and-coming architect I. M. Pei was chosen to design the complex, which ended up being a watershed design in his career and a boldly innovative work with cutting edge applications of technology and materials, utilizing innovative thinking about urban planning, use of space, and sculptural form. The complex also included a striking 36 ft.-tall version of Picasso’s sculpture “Portrait of Sylvette,” built especially for the site, one of only two public outdoor Picasso sculptures in the Western Hemisphere.

Village Preservation proposed and secured landmark designation of the complex in 2008, which prevented NYU from erecting a planned 400 ft. tall tower on the site.