Please join Village Preservation, Two Boots, and Apple Bank to unveil a historic plaque marking the site of the Fillmore East, the beloved concert hall that filled this corner with music from 1968-1971. The building is located in the East Village/Lower East Side Historic District. The event will include appearances by guitarist Lenny Kaye and Joshua White, founder of the Joshua Light Show, which splashed the concert hall with psychedelic color.

Despite its brief life, the Fillmore East is remembered with tremendous affection by both the artists who played there and the concertgoers who enjoyed it, as a place of warmth, spirit, innovation and the finest popular music. The great impresario Bill Graham opened the hall as a sibling to his Fillmore West in San Francisco, and brought in performers including The Doors, B.B. King, Roberta Flack, The Byrds, Richie Havens, Taj Mahal, Jefferson Airplane, Pink Floyd, Joan Baez, Jeff Beck, the Staple Singers, and many more.

The building was a destination for entertainment both before and after the Fillmore East. It opened in 1926 as a Yiddish theater, soon becoming the Loew’s Commodore movie house, followed by the Village Theater. In the 1980s it was the trendsetting gay nightclub The Saint, becoming Emigrant Bank in 1995, and Apple Bank in 2013. While the façade retains much of its original Medieval Revival style, the rear of the building, which housed the auditorium, was demolished and replaced by the Fillmore apartment building in 1997. 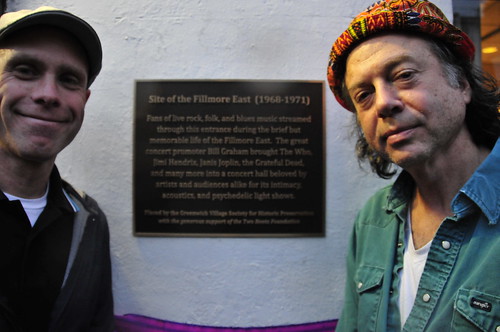