This Black History Month, the Schomburg Center’s Lapidus Center for the Historical Analysis of Transatlantic Slavery and Village Preservation are partnering to illuminate aspects of New York City’s early Black neighborhoods. From Seneca Village, a community now being memorialized in Central Park, to Greenwich Village’s “Little Africa,” our group of experts will address the work of discovery, preservation, and documentation of these and other historically significant, but widely-forgotten Black communities.
We are pleased that the following scholars and preservationists will join us:
Leslie M. Harris is a professor of history at Northwestern University and author of numerous books, including In the Shadow of Slavery: African Americans in New York City, 1626-1863 and Slavery in New York (co-edited with Ira Berlin).
Jamila Brathwaite is a trustee of the African American Historical Society of Rockland County. She is an educator and curator and has uncovered hidden histories of the African Diaspora, including Greenwich Village’s “Little Africa,” which flourished during the 19th century.
John Reddick is an architectural historian and Columbia University Community Scholar who is active in Harlem’s culture, art, and preservation. He’s lectured and published broadly, and recently served as a curator and facilitator of the Harlem Focus series at the Smithsonian Institution’s Cooper-Hewitt Design Center.
Michelle D. Commander is the associate director and curator of the Lapidus Center for the Historical Analysis of Transatlantic Slavery at the Schomburg Center. She is the author of Afro-Atlantic Flight: Speculative Returns and The Black Fantastic, among other works.

This event is fully accessible. 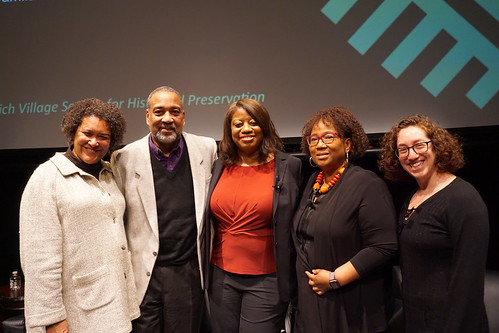