On June 7, 2010 Village Preservation held its 31st Annual Meeting and 21st Annual Village Awards in the landmarked Auditorium of The New School.

Enjoy a full set of photos below. You can also read Executive Director Andrew Berman’s annual report, and view his accompanying slideshow. 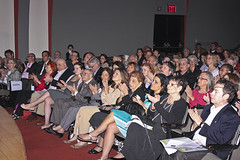 For someone who has had four careers in his lifetime, Albert Bennett says he came to preservation late, but he has more than made up for it in the quality and quantity of his service. Albert has been working for his block on Morton Street, where he has lived for over 55 years, since 1993. He served as vice-president of the Morton Street Block Association for four years and then spent the next eleven as President. One of his most lasting accomplishments as President was getting tree guards installed along the length of the street, which continue to be planted each spring by the Association’s Beautification Committee. He also continues to serve on the executive committee of the MSBA. Albert has also served as a public member of Community Board 2 for over 12 years, a post he continues to hold. For almost four years, he represented the CB2 Landmarks Committee at Landmarks Preservation Commission hearings, making a point to visit the site of each application coming before the committee for consideration in the tradition of preservation pioneer Verna Small. Albert also contributed the archival notes for the book Maritime Mile, serves, and is active in the Federation to Preserve the Greenwich Village Waterfront & Great Port.

Caffe Reggio, on MacDougal Street just south of Washington Square Park, is the quintessential South Village business. Originally owned by Domenico Parisi, Reggio is the first café in America to serve cappuccino and has been open for 83 years. Niso and Hilda Cavallacci bought the café in 1955, renting the space for $18 a month. Now owned by their son Fabrizio, Reggio remains much like it was in the early days, with some modern updates such as a full menu and hours that run into the early morning hours seven days a week. The original espresso machine, which was made in 1902 as a prototype and ran on coal, was converted to gas in the 1970s. It has since been retired, but still stands proudly in the shop.  Reggio’s artwork rivals many museums, with pieces belonging to Italy’s Medici family and from the school of Caravaggio.  The café has served as the set for several movies, including “Next Stop, Greenwich Village” and “The Godfather, Part II,” and while many of their past regulars are not necessarily household Hollywood names, any Villager will know Jack Kerouac, Umberto Eco, and Bob Dylan.

A life-long Villager, Lucy Cecere has been working to help senior citizens in her community for nearly forty years. Born on Thompson Street as one of five daughters, Lucy credits her mother with instilling in her the importance of doing good work in your own neighborhood. In 1973, when state government refused to support programs for the senior citizens of Greenwich Village on the grounds that is was a wealthy neighborhood, she succeeded in getting four neighborhood churches to serve lunch to needy seniors. The organization she helped to found, the Caring Community, is today housed in four different locations in the Village and has grown to serve more than 2,000 seniors as it promotes community, wellness, and health. Lucy retired from the organization in 2001 after almost thirty years of service, but remains active on the board. In 1975, Cecere, along with other concerned neighbors, came to the rescue of the Village Nursing Home—now know as Village Care—by collecting donations door to door, holding bake sales, and even garnering the attention of first lady Rosalyn Carter. She even worked to provide residents of the home with important personal touches such as birthday flowers and special meals for the holidays. Most recently, Lucy has become a vocal supporter of landmarking for the South Village, the neighborhood she has called home all her life. She serves as a member of the GVSHP’s South Village Advisory Board, solicits signatures for petitions in the store she owns with her husband Lenny, Something Special, and attends rallies on behalf of the cause.

The High Line was hailed by the New York Times as “one of the most thoughtful, sensitively designed public spaces built in New York in years” and, since opening in June of 2009, the elevated park has attracted over 2 million visitors. Originally built in the 1930s as part of a massive public-private infrastructure project called the West Side Improvement Project, the rail line was thirteen miles long, before a decrease in rail traffic led to its closing in 1980. The reuse of the elevated rail bed as a public space was conceived in 1999 by Friends of the High Line cofounders Joshua David and Robert Hammond. The project won support from the City in 2002. Outreach to the community was a large part of the process, with a public design competition and frequent community input sessions. The first section of the park was designed by James Corner Field Operations with Diller Scofidio & Renfro and runs from Gansevoort Street to 20th Street. Section two, which stretches from 20th to 30th streets is scheduled to be completed in 2011 and section three, above 30th Street, is still undergoing the public review process. Despite substantial and unique challenges to its construction and landscaping due to the age of the structure, complexity of the plantings, and need for drainage, it all has paid off – to put it modestly. It is owned by the City of New York and operated by the Department of Parks & Recreation. Friends of the High Line is the conservancy charged with raising private funds for the park and overseeing its maintenance and operations.

Owned by the Otway family since 1964, Theatre 80 on St. Mark’s Place has had a remarkable past and a future that promises to be equally vibrant. Notorious gangster Walter Sheib owned the building during Prohibition where he operated a speakeasy and jazz club. After Prohibition was repealed, the space was transformed into a now-legal jazz club—where a young Frank Sinatra is rumored to have worked as a singing waiter. Actor, novelist, and playwright Howard Otway purchased the building in 1964, digging the auditorium out by hand with his two sons Thomas and Lorcan. They found a maze of hidden rooms and two million dollars in a locked safe in the basement. The theater premiered the hit, Off-Broadway show “You’re a Good Man, Charlie Brown” in 1967. Besides productions such as this, the theater also hosted the auditions for the Broadway hit, “Hair,” and featured film revivals beginning in 1971. Lorcan Otway took over the property in 1994 after his father’s death and the space soon became the home of the famed Pearl Theater Company, who remained in the space until 2009. Following the Pearl Theater Company’s departure, Lorcan Otway joined forces with the Lower East Side History Project’s Eric Ferrara to found the Museum of the American Gangster. Today, the building is home to both Theater 80 and Museum of the American Gangster, beautifully highlighting and celebrating the property’s rich history. Theatre 80 continues to host performances featuring local East Village theater groups and productions of new theatrical works (including plays, musicals, and operas) while the Museum shows great promise for the future use of the space.

Walking into Veselka in the East Village, which you can do 24 hours a day, 7 days a week, you know this isn’t your average restaurant. Opened in 1954 by Ukrainian immigrant Wolodymyr Darmochwal as a newsstand and candy shop on the corner of Second Avenue and Ninth Street, Veselka was located in what was the largest Ukrainian neighborhood outside the Ukraine at the time. Known for its handmade pierogi, stuffed cabbage, and borscht, Veselka has remained successful by offering classic American diner food alongside its traditional dishes. Owner Tom Birchard is only the second owner of the restaurant, having taken over from his father-in-law in the 1970s. Still family-run, with 80 employees, including three dedicated to making peirogi and three to bake, the restaurant is managed by Tom’s son Jason. Tom credits much of his success to his landlord, a fraternal Ukrainian organization named PLAST, an organization that has had a symbiotic relationship with the Darmochwal family for many years. Much of their success might also be attributed to Veselka’s ability to change with the times. It has often changed its menu to facilitate the changing make-up of the neighborhood, and now even has a cookbook for those not fortunate enough to live nearby. Veselka’s diverse staff, extensive menu, and ability to stay current while still remaining true to tradition has made Veselka a Village institution.

Westbeth opened forty years ago, in 1970, as the first large-scale conversion of an industrial building for residential use—and the first subsidized housing for artists in the United States. The brainchild of Roger Stevens of the National Endowment for the Arts and Jacob Kaplan of the J.M. Kaplan Fund, the two men selected the former Bell Laboratories at West and Bethune Streets as the site for the project. Under the direction of Joan Davidson, Kaplan’s daughter, architect Richard Meier was hired to make the industrial buildings habitable. Because it was the first project of its kind, financing through the Federal Housing Administration was a challenge and zoning approvals by the City were necessary. A committee was also formed to create the selection process for residents. The 383 apartments were quickly occupied by all manner of artists, including visual artists, writers, musicians, actors, dancers, filmmakers, composers, architects, stage directors, printmakers, theater producers, and hundreds of children. Many of Westbeth’s original tenants still live there today. The Westbeth Corporation runs the facility and the nonprofit Westbeth Artists Residents Council, created in 1980, represents all tenants on internal housing issues and assists in presenting the art work of residents within the community. Despite some setbacks over the years, Westbeth has thrived. In 2009 GVSHP, with support from the JM Kaplan Fund, successfully nominated Westbeth for listing on the State and National Registers of Historic Places, and the complex is currently being considered for landmark status—a promise made by the city to the Society and other community groups in 2005 in response to our fight to preserve the Far West Village.