On June 17, 2013 Village preservation held its 33rd Annual Meeting and 23rd Annual Village Awards in the landmarked Auditorium of The New School. We were honored to be joined by several hundred friends and supporters, including the evening’s host, Calvin Trillin.

Want to see more of the 2013 Village Awards? Enjoy a full set of photos below. You can also read Executive Director Andrew Berman’s annual report, and view his accompanying slideshow. 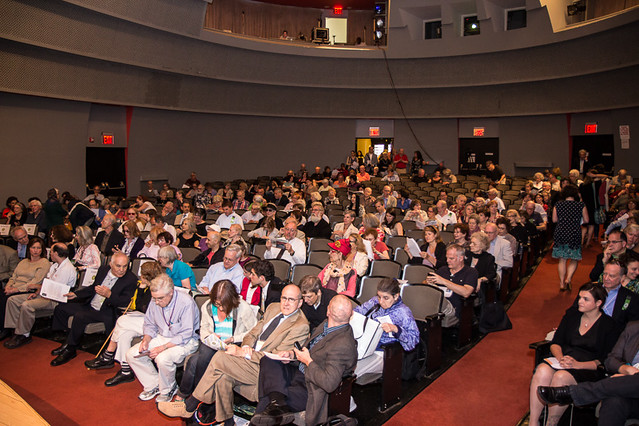 Originally located at 59 MacDougal Street when it first opened as the Stock Pharmacy in 1832, Avignone Chemists is now located along a quiet strip of Sixth Avenue, between Bleecker and Downing Streets. The name Avignone came into being in 1898, when Italian immigrant Francis Avignone bought the business. The current location was built for the Avignone brothers in 1929, when the pharmacy’s original location was slated for demolition due to the widening of Houston Street.

When Carmine Palermo Sr. began working at Block Drug Store on the corner of Second Avenue and 6th Street in 1962, a drug store had already existed on that spot for 70 years. The Palermo family has since preserved more than just the historic storefront. At Block, they know customers by name, go the extra mile in filling prescriptions, and contribute to the neighborhood in a myriad of small ways.

NYU Faculty Against the Sexton Plan

Officially formed in 2012 in opposition to the NYU 2031, or ‘Sexton’ plan, after the University’s president, the New York University Faculty Against the Sexton Plan is a bold coalition of faculty members in public disagreement about NYU’s expansion plan in Greenwich Village.

Sir Winston Churchill Square, a small, quiet park located between a bustling Sixth Avenue and a quiet Downing Street, certainly lives up to its formidable namesake, the former British prime minister. Measuring in at just 0.05 acres, the site was acquired by the Parks Department in 1943. It was redesigned in 1999 by the Parks Department to include more garden space.

For nearly twenty years, Jeremiah Shea has served on the Ninth Precinct Community Council, transforming the organization from one that operated for the benefit of few to one that has developed productive and open communication between the police and the community it serves.

The Bowery Alliance of Neighbors, a vocal advocate for the preservation and appreciation of the Bowery as one of New York’s most invaluable and irreplaceable historical and cultural resources, is certainly following in Regina’s preservation foot-steps. Although portions of the west side of the Bowery are located within landmark and special zoning districts, development pressures are abundant. The east side of the Bowery lacks any landmark protection, current zoning favors larger, taller buildings, and the street’s low-income residents are at risk.