On June 16, 2014 Village Preservation held its 34th Annual Meeting and 24th Annual Village Awards in the landmarked Auditorium of The New School. We were honored to be joined by several hundred friends and supporters, including the evening’s host, Calvin Trillin.

Want to see more of the 2014 Village Awards? Enjoy a full set of photos below. You can also read Executive Director Andrew Berman’s annual report, and view his accompanying slideshow. 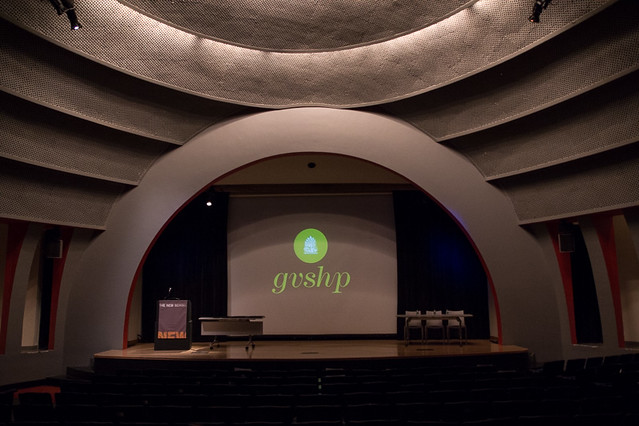 La MaMa Experimental Theatre Club was founded by clothing designer and Louisiana native Ellen Stewart in 1961, in a tiny basement space at 321 East 9th Street. Ellen founded LaMaMa so that her brother and his friends would have a place to perform. The theatre survived by selling coffee and passing the hat, no admission was charged.

In 1905 Benjamin Steinberg, a Russian immigrant who lived nearby on Second Avenue, opened a pawnshop at 64 Third Avenue specializing in engineering, architectural, and drafting instruments. He named his business after the New York Central Line, a train line that fascinated him and represented the idea of America to him. In the 1940s, his son Harold turned the business into an artist’s supply house. It was a shrewd decision because the neighborhood was becoming the center of New York City’s art district with many of the most innovative American artists working and living nearby. The family was able to purchase the building at 62 Third Avenue where it continues to be one of the country’s most acclaimed and comprehensive art supply stores.

The New York Marble Cemetery is the first privately owned, nonsectarian cemetery in New York City. Opened in 1830, before the rural cemetery movement began, it is designated a NYC Landmark and listed on the National Register of Historic Places. It remains as an urban oasis, hidden in the interior of an East Village block, its 156 marble vaults concealed beneath an open lawn, enclosed within a 12-foot marble wall and wrought iron gates. Today each vault belongs to the heirs of its owner of record, who is frequently the original 1830 purchaser.

The 260-square foot South Village storefront that houses Pino Prime Meats has been a butcher shop for at least 100 years, as evidenced by the historic 1917 ice box built into a wall near the back. In 1978 Pino Cinquemani took over the butcher shop from his friend Mario, and now runs it with his two sons, Sal and Leo.

Unoppressive Non-Imperialist Bargain Books is a family-owned bookstore founded by husband & wife Village residents Jim Drougas and Indiana Bervis in 1992. They chose that name for the store to reflect a winsome and progressive spirit, which they hope the store embodies.

The Village Community Boathouse (VCB) operates on the South side of Pier 40, in a space where community volunteers and students from area high schools and colleges build long rowboats and take them out on New York’s rivers and the harbor for trips of varying durations.

Kathy Donaldson has been the president of the Bedford Barrow Commerce Block Association since 1993, and has been a tireless guiding force in the organization since 1974. Kathy, in fact, is one of the founding members of her block association, and is responsible for many of their hallmark community initiatives.