On June 17, 2015 Village Preservation held its 35th Annual Meeting and 25th Annual Village Awards in the landmarked Auditorium of The New School. We were honored to be joined by several hundred friends and supporters, including the evening’s host, Calvin Trillin.

Want to see more of the 2015 Village Awards? Enjoy a full set of photos below. You can also read Executive Director Andrew Berman’s annual report, and view his accompanying slideshow. 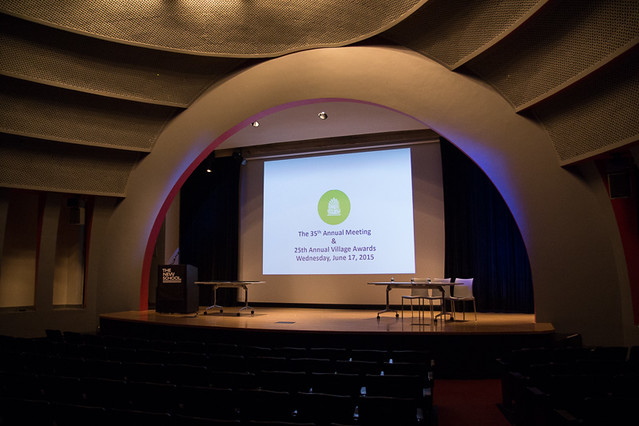 Visiting Barbara Shaum’s sandal shop on East 4th Street is like taking a marvelous journey back in time to the Sixties, when both the East and West Village had countless leather shops where hand-crafted items were made. Barbara is now one of the last of these artisans left.

Bonnie Slotnick began her career as an artist, then worked for a cookbook publisher, and as a book scout for the well-known uptown bookstore Kitchen Arts and Letters. A West 10th street resident since 1976, Bonnie is vocal at community board meetings about the importance of maintaining the Village for residents as well as tourists and business, and the importance of supporting independent businesses of all kinds.

David Rothenberg has lived in the Village since the 1960s, first at Sheridan Square across from the Stonewall Inn where he witnessed the riots, and for the past few decades on West 13th Street. David began his career in the theater as a producer and publicist for many memorable on and off Broadway productions.

You may have visited our next awardee on this year’s GVSHP House Tour. If you missed it, don’t worry, because it’s open to the public. We are pleased to recognize what has rightfully been called “one of the little art treasures of New York” by The Wall Street Journal: The Renee & Chaim Gross Foundation.

GVSHP is thrilled to present a 2015 Village Award for the restoration of 201 East 12th Street to the Manocherian Brothers, the owners of the property, and Thomas Fenniman, Christopher Rome, and Karl Vinge of Thomas A. Fenniman, Architect.

The winners of the 2015 Regina Kellerman Award for Outstanding preservation, and our final awardees for the evening, are James and Karla Murray. The Murrays are extraordinary artists, photographers, historians, small business advocates, and preservationists.