On June 6, 2017 Village Preservation held its 37th Annual Meeting and 27th Annual Village Awards in the landmarked Auditorium of The New School. We were honored to be joined by several hundred friends and supporters including host Bob Holman.

Want to see more of the 2017 Village Awards? Enjoy a full set of photos below. You can also read Executive Director Andrew Berman’s annual report, and view his accompanying slideshow. 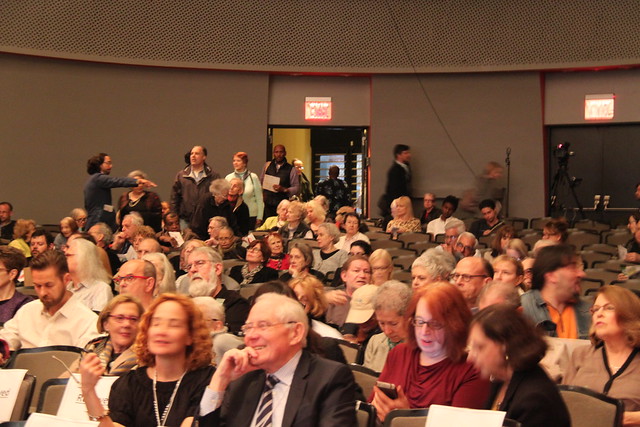 The Public Theater was founded by Joseph Papp and opened in 1967 with the world premiere of the musical Hair. Now one of our city’s preeminent cultural institutions, The Public is a national treasure in which varied voices, rhythms, and cultures converge. Each year, more than 350,000 people attend Public Theater productions and events at six downtown stages, including Joe’s Pub and Shakespeare in the Park. The Public is dedicated to embracing the complexities of contemporary society and nurturing both artists and audiences, as it continues Joseph Papp’s legacy of creating a place of inclusion and a forum for ideas. The Public’s trailblazing adaptive reuse of an abandoned library was one of the first and most successful efforts to breathe new life into old buildings.

B & H has been a mainstay in the East Village since 1938, located at 127 2nd Avenue. In 2015, B & H narrowly escaped serious damage due to the tragic and deadly 2nd Avenue gas explosion just a few doors down. The restaurant was forced to close for about five months and nearly didn’t reopen, but thanks to support from countless regulars, they made a triumphant return in August 2015. Owner’s Fawzy and Ola have continued the tradition of maintaining the neighborhood feel of B & H. Challah por favor!

“Good Old Lower East Side” is an apt name for this group, which works hard to preserve the spirit and character of the Lower East Side. Celebrating is 40th anniversary this year, GOLES directly serves over 2,000 families each year, and thousands more through their advocacy, training, and education work. GOLES advocates quality, affordable housing for the people of the East Village and Lower East Side, and for services which add to that quality of life. GOLES takes a very holistic view, combining affordable housing advocacy with maintaining the scale and character of the neighborhood, and fighting for cultural resources and green space which help make communities thrive.

Since 1983, Pam Pier, owner of children’s toy store Dinosaur Hill located at 306 East 9th Street, has striven to offer goods that actively engage children, encouraging them to move, make, color, build, connect and puzzle things out. “One of my major objectives nowadays is to try to interest kids enough that they stay out of cyberspace. We want them to learn by doing, and to develop hand-eye skills, and to become makers and builders.” From the beginning, Dinosaur Hill has encouraged neighborhood artists and craftspeople to get involved. Pam has been very active in the community, volunteering at the Green Oasis community garden, participating in reading encouragement programs at local schools, and providing gifts to children who complete a reading challenge.

Patisserie Claude at 187 West 4th Street is a Village treasure. The patisserie was founded by Claude, a French-born baker of impeccable pastries and viennoiserie, whose standards have been carried on by his equally talented former assistant of twenty-two years, Pablo, now the current owner for the past seven years. The croissants are buttery; the quiches are filled most delicately with ham or mushrooms or spinach or endive; the tarts brim with fresh plum or apricot, and don’t miss the eclairs, mille feuilles, or pain au chocolat. The welcome is warm, the coffee is strong, and the small shop a slice of Paris in Greenwich Village.

The restoration of the O’Toole Building, the new AIDS Memorial (recently praised in Architectural Digest) and St. Vincent’s Triangle Park have transformed this important Village intersection. A thoughtful restoration, during which the original architect of the building Albert Ledner was consulted, restored the Theresa O’Toole Medical Services Building (now Lenox Hill Greenwich Village) into a beautiful landmark, while also providing a much-needed state of the art stand-alone emergency room, ambulatory surgery center, and imaging area.