On June 12, 2019, Village Preservation held its 39th Annual Meeting and 29th Annual Village Awards in the landmarked Auditorium of The New School. We were honored to be joined by several hundred friends and supporters, including the evening’s host, Calvin Trillin.
Screen reader support enabled.

On June 12, 2019, Village Preservation held its 39th Annual Meeting and 29th Annual Village Awards in the landmarked Auditorium of The New School. We were honored to be joined by several hundred friends and supporters, including the evening’s host, Calvin Trillin. 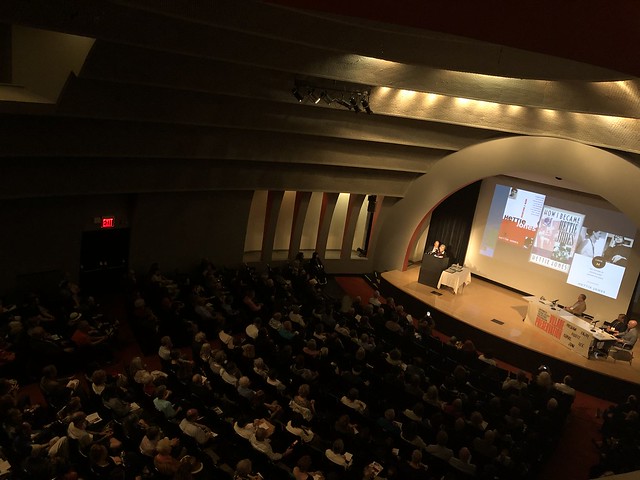 This volunteer group formed in 2013 to preserve and protect Christopher Park, which has served as a gathering place in Greenwich Village for 180 years. The park was a focal point of the Stonewall Riots 50 years ago this June.

Santo and Margaret Mollica opened their shop in 1982, combining the odd jobs they’d been doing in their community into a brick and mortar business with joy and fun. Today they do a lot of business online in addition to printing stickers and business cards, creating custom hardwood stamps, scanning, binding, laminating, and selling everything from batteries to sidewalk chalk.

The Brant Foundation and Gluckman Tang Architects have renovated and restored 421 East 6th Street, a former Con Ed substation and home and studio of famed artist Walter De Maria. Now open to the public, the Brant Foundation building has breathed new life into the area with 7,000 square feet of exhibition space arrayed across four floors, two new gardens, and a landscaped roof terrace.

An English food pantry and a Fish and Chips shop that has beenwelcoming everyone from “little old ladies to rockstars, andlongtime locals to homesick expats.” We highly recommend the tea and scones! A small business centerpiece of the Greenwich Village Historic District #GVHD50.

First opened in 1961, this club mostly provided a showcase for unknowns. Some of those unknowns achieved great success later, like Stevie Wonder, Pete Seeger, Bob Dylan, Bill Haley, and Robert Klein. To this day, The Bitter End celebrates its storied history by keeping a firm dedication to continue helping shape emerging artists.

Poet, memoirist, writing teacher, an activist for women’s rights, civil rights, and prisoner’s rights, and a proud mother of two, Hettie Jones has been a powerful force in Greenwich Village and the Lower East Side since the 1950s. One of the most prominent women of the Beat Generation, she co-founded the literary magazine Yugen with her then-husband, writer Amiri Baraka. Hettie’s memoir, How I Became Hettie Jones, vividly describes this artistic whirlwind, her challenges as a wife and mother in a bi-racial family during Civil Rights Era, tensions with her Jewish family, and the challenge to find her own way as a poet and writer in a literary scene dominated by men.

Fred W. McDarrah was the primary photographer for the Village Voice for decades following the newspaper’s inception in 1955. He covered key moments in history including the Village counterculture, Gay Rights, Women’s Rights, the Vietnam War, and Experimental Theater in ways not done by mainstream media. His estate is fiercely protective of the Village and believes the photographs can and should continue to educate and protect landmarks now and in the future.
Image used with permission of the Estate of Fred W. McDarrah.