Greenwich Village lost one of its greats this weekend with the passing of Lucy Cecere at the age of 87.  Though small in stature, Lucy was a true giant in a neighborhood of outsized personalities — an activist, a pioneer, someone who deeply loved her neighborhood and was willing to fight to preserve it.  She was a friend of GVSHP, and someone I will miss dearly.

Lucy was born and raised in the Village, in what is often called the South Village, on Thompson Street. One of five daughters, Lucy credits her mother with instilling in her the importance of service in one’s community.  Lucy co-founded the Caring Community, an organization which provides services to 2,000 seniors in and around Greenwich Village.  Lucy helped save the Village Nursing Home in 1975 when it was threatened, and stayed active for many years with each organization.  More recently, she became a member of GVSHP’s South Village Advisory Board, helping to steer our efforts to honor and preserve that neighborhood through landmark designation.  She and her husband Lenny owned and operated the small business “Something Special” on MacDougal Street,  a neighborhood fixture.  Last year, at GVSHP’s 20th annual Village Awards, we presented a special award to Lucy for her years of service to her community. 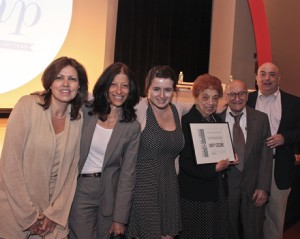 Lucy with her family at the Village Awards, 2010

In addition to her notable resume, Lucy was a memorable character in every respect.  Warm, gregarious, and engaging, she was also a fierce and tenacious advocate.  I spoke to Lucy quite regularly over the last several years, and no conversation was over until she asked me “when are we going to get the South Village landmarked?” and “when are we going to get 43 MacDougal fixed up?,” referring to the dilapidated and neglected landmark house on her block which was another cause near and dear to her heart.

Lucy not only made an impression one-on-one, but in front of a crowd too.  When a developer demolished an 1861 house at 178 Bleecker Street in our proposed South Village Historic District and we rallied to call upon the City to move ahead with landmark designation of the area, no one was able to rile up the crowd and get them going like Lucy.  And when GVSHP held a South Village celebration on Columbus Day in 2007 to salute the neighborhood’s Italian-American heritage and call attention to the need for landmark designation, Lucy’s personal stories of her and her family’s life and experiences in the neighborhood enraptured the crowd.

More than anything, though, I will probably remember Lucy’s warm smile and her generous spirit.  She was kind and giving and never failed to make you laugh.  ‘Something Special’ indeed.

See more about Lucy on our webpage honoring her HERE. 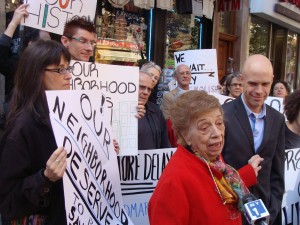 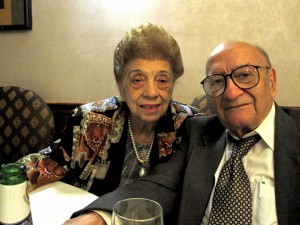 One response to “In Memoriam: Lucy Cecere”