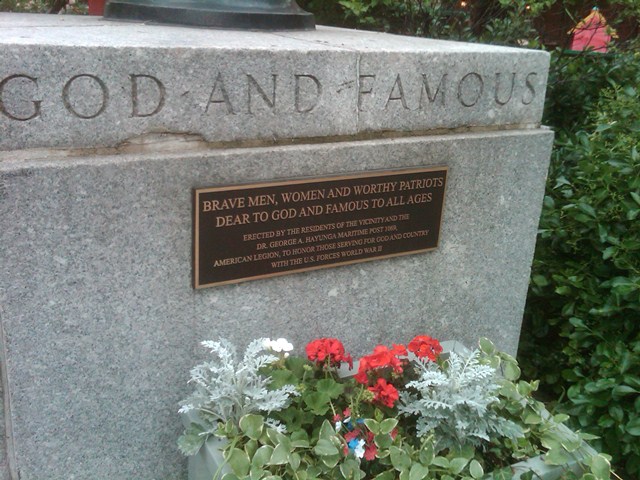 With Memorial Day here, we thought we would take a look at some of the sites in the Village that commemorate those who gave their lives in the service of our nation. Of course there’s the Abingdon Square Doughboy Statue that honors those who served in World War I, and the large plaque affixed to the front of St. Joseph’s Church on Sixth Avenue that notes those from the neighborhood who served and gave their lives during World War II.  Easier to overlook, however, are two other locations that offer a chance to reflect on the sacrifices and stories of two individual Villagers.

McCarthy Square, a triangle of land where 7th Avenue South, Charles Street and Waverly Place intersect, honors the memory of Marine Private Bernard McCarthy, who was killed in action at Guadalcanal in 1942. In the same way that the southward extension of 6th Avenue created irregularly shaped intersections because of the way blocks were cut off to accommodate the new thoroughfare, this particular corner of 7th Avenue South forms a small triangular island. The triangle is located just down the block from where Private McCarthy lived–at 12 Charles Street—and was renamed in 1943 by Mayor LaGuardia and the City Council to commemorate McCarthy’s service. The twenty-two year old Marine was the first resident of Greenwich Village to be reported killed in action during World War II.

Today the triangle offers a peaceful spot for rest and reflection beneath the low trees and large yardarm flagpole. This flagpole atop the granite base of the central monument was actually used previously during the 1939-40 World’s Fair in Flushing, Queens, and was repurposed for use in the memorial square. The square was recently rededicated in 2008, and its upkeep and beautification is handled both by the Parks Department and local Villagers, particularly via the dedicated work of Charles Street resident Frank Crapanzano.

Farther west, at Hudson Street, between Horatio Street and Gansevoort Street, we find Corporal John A. Seravalli Playground, which commemorates the sacrifice of another young Village resident. John Seravalli served in the Army’s 1st Infantry Division and was killed in action at the age of twenty in Tay Ninh, South Vietnam in 1967.

Seravelli’s family requested that the park—the space for which was cleared and built in the late 1950s–be renamed in honor of their son. You can read more about this stretch of Hudson Street in the Greenwich Village Historic District designation report in GVSHP’s Resources section. The City Council agreed with the family’s request, and a plaque noting Corporal Seravelli’s service was dedicated in 1968.

Through the years, the playground space has been renovated a couple of times and even graced by the likes of Tina Turner during the 1980s (see our post about Village music videos). In recent years the park has been subjected to some major work as part of the colossal public works effort to complete City Water Tunnel No. 3. Tunnel 3 is part of a decades-long project by the Department of Environmental Protection to give the city a third critical connection to the Upstate water supply. One of the branches of the main tunnel runs beneath the Village, and a years-long project to connect a shaft from the surface down to the main tunnel (under Seravalli Playground) was completed.