With all the recent discussions about the triangle site at 7th Avenue and West 12th Street, we thought we’d take a look at the space’s use earlier in the twentieth century. As you may know, this triangular plot of land where Greenwich Avenue, 7th Avenue, and West 12th Street intersect today houses a delivery handling center for the former St. Vincent’s Hospital and a small area of greenspace near 7th Avenue. New development plans for the St. Vincent’s campus from the Rudin organization and North Shore-Long Island Jewish Health System have included proposals for the re-use of this triangular space — read all about it here. But before this triangle became a rather utilitarian delivery bay/open space, did you know that it housed a great movie palace? 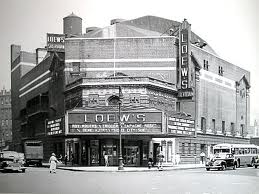 The theater on the triangle site was constructed in 1921 and was taken over by Loew’s in December 1926. The Loew’s Sheridan Theatre housed 2,342 seats (including its balcony) and a wide screen. By the late 1960s, the attendance just wasn’t strong enough to keep the theater viable. In 1969 the theater was demolished, originally to make way for a new nurses’ residence building for St. Vincent’s Hospital, but eventually transformed in the late 1970s to the handling center and garden we see today.

And for all you Edward Hopper aficionados out there who may have enjoyed our previous posts about his paintings Early Sunday Morning, Nighthawks, and Drug Store, you’ll be glad to know that he also captured the interior of this remarkable Village theater in a 1937 piece titled The Sheridan Theatre.