Columbus Day has traditionally served as an opportunity to honor the contributions of Italian-Americans to our country.

The South Village is one of New York’s great immigrant neighborhoods from the last great wave of immigration to New York and the United States at the turn of the last century.  Thousands of immigrants, mostly but not exclusively from Italy, transformed this neighborhood and turned it into a launching pad for generations of New Yorkers to pursue their American dream (read Village Preservation’s report, “The Italians of the South Village“).

In addition to a remarkably intact collection of tenements and rowhouses built or transformed to house these immigrants, the South Village contains an incredible array of institutions and houses of worship which served and nurtured these immigrant communities.

And of course the  South Village not only served as home to thousands of immigrants from Italy and other countries, and their children and grandchildren.  The South Village is also notable for having been home to New York’s largest African-American community in the mid-19th century; to one of its very first concentrated and visible gay and lesbian communities; and to some of the most important artists, musicians, and writers of the 20th century, as well as the coffeehouses,  theaters, and performance venues which helped launch their careers.

To protect and honor this great architectural and cultural legacy, Village Preservation has proposed landmark designation for the South Village, which was entirely left out of the Greenwich Village Historic District (read Village Preservation’s history and report, “The South Village: A Proposal for Historic District Designation“).  After years of effort, in 2010 the first third of our proposed district was designated by the city’s Landmarks Preservation Commission.

But the remaining two-thirds remains unprotected.  Unfortunately, since we first proposed the South Village for landmark designation, many of the neighborhood’s most historically and architecturally significant sites have been severely compromised or destroyed.

The Provincetown Playhouse and Apartments.  The Circle in the Square Theater.  The Sullivan Street Playhouse.  The Tunnel Garage.  178 Bleecker Street’s 1861 rowhouse.  The original Fat Black Pussycat Theater sign. These are just some of the losses.

And more are imminent.  The Children’s Aid Society’s buildings, in which generations of immigrant children were educated, have been sold for development. 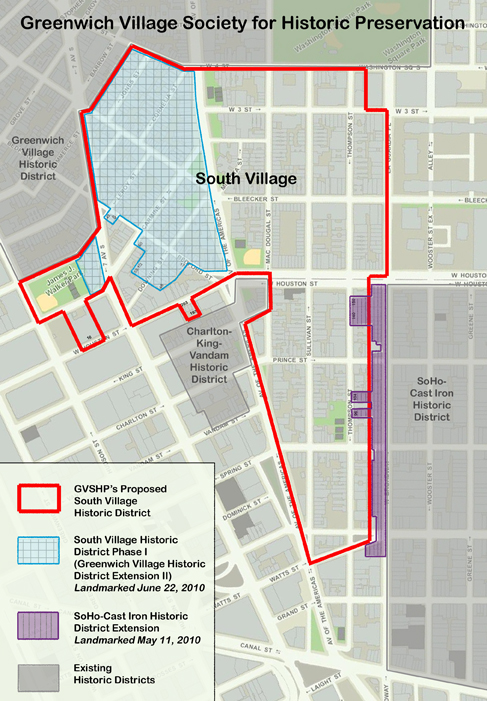 So this Columbus Day, please join Village Preservation in calling upon the City to finally finish the job and landmark the remainder of the South  Village.  We owe it to ourselves, and the generations of New Yorkers who helped make this distinctive neighborhood so wonderful, to make sure that the South Village’s irreplaceable architecture, and  incredible legacy of immigrant struggle and success, cultural innovation and vitality, and outreach and inclusion, are honored and protected.

To write to city officials in support of landmarking the South Village, click HERE.

One response to “This Columbus Day, Save the South Village”