Rising like an ark over Christopher Street, the Archive Building’s construction and multiple uses over a New York century reflect the changing character of the Far West Village waterfront and the city as a whole. Join us as we trace the unique history of this colossus of the West Village.

Filling the entire block bounded by Barrow, Greenwich, Washington, and Christopher Streets, the Archive Building sits on an irregularly shaped lot more than an acre in size. In the best tradition of the Village street plan (or lack thereof), none of the lot sides are actually parallel to each other. Construction began in 1892 and was completed in 1899 based on the designs of Willoughby J. Edbrooke, the supervising architect of the U.S. Treasury. Crafted in the Romanesque Revival style, the structure is capped by a weighty cornice atop a masonry façade that features wide brick support piers and round Roman arches and a three foot thick brick base. The massive building reflected the Far West Village’s transition from earlier light residential use to a more commercial and industrial character that would remain for much of the twentieth century.

Though English-born, Edbrooke came to the U.S. government from a successful practice in Chicago where the influence of the developing “Chicago Style,” disseminated by the likes of Louis Sullivan and Dankmar Adler, was strong. It’s been noted that the façade of the Archive Building reflects the Chicago work of Sullivan and Adler’s Auditorium building. You can find an actual Louis Sullivan building here in New York right over in NoHo – the Bayard-Condict Building on Bleecker Street.

The building, originally termed the U.S. Appraisers’ Warehouse, was used by the U.S. Customs Service to assess the tariffs on goods arriving in New York via ship. Originally it was meant to be built near the planned U.S. Custom House at Bowling Green far downtown, but shipping owners lobbied to have the building constructed closer to the West Side piers near Christopher Street so they would not have to deal with the headache of navigating their cargoes from the piers and through the congested, narrow streets of lower Manhattan.

After the Federal income tax was instituted in 1913, revenue generated by import tariffs was no longer a crucial component of the Federal budget and by the 1930s the building was reconfigured into office space for the National Archives, a post office, and other Federal agencies. 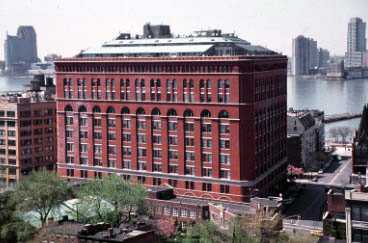 Even as the various Federal tenants gradually began to depart, the City recognized the important character of the structure and in 1966 designated it a city landmark. It was later recognized by the State and National Register of Historic Places in 1973. By 1976 the federal government deemed the building to be government surplus property and its future was in jeopardy.

However a deal was successfully arranged to preserve the structure by transferring ownership to the New York State Urban Development Corporation. The UDC in turn leased the property to a private developer for residential conversion.

By the 1980s, despite its continuing industrial, gritty character, the Far West Village had lost many of the industries housed in the large structures in the neighborhood. The area was beginning its transformation into one of the most sought after residential communities in the city. By the late 80s several large residential buildings were constructed or re-purposed from existing commercial structures farther and farther west.

The renovation of the current Archive Building as we know it was completed in 1988. Although many historic elements were retained, many new elements were added and an entire interior atrium was cut into the structure to make the floor plans viable for apartment living. It was one of the earlier examples of preservation by commercial conversion in to residences in the city. The conversion of Westbeth (which was just landmarked) to the north is another, but it did not have the same overtly commercial character.

By the turn of the 21st century, the neighborhood had almost completely reverted to a residential enclave and many of the vestiges of its late nineteenth and twentieth century industrial and working waterfront heritage had been or were in the process of being erased. GVSHP and others successfully fought to get much of the Far West Village downzoned and landmark districts extended to preserve this important heritage, which Jane Jacobs had specifically called out to protect even in the 1960s.

One response to “West Village Colossus”