The final performance of the off-Broadway hit The Fantasticks took place at the Sullivan Street Playhouse at 181 Sullivan Street in the South Village on January 13, 2002.  That marked the end of a remarkable 42-year run of the show – making it the longest-running musical ever. Unfortunately, the closing of the show and playhouse would also mark the beginning of the end for the building that housed the theater — a fate that would befall many other historic theaters and structures in the vulnerable South Village neighborhood. In 2005, an extreme alteration of 181 Sullivan Street converted it from a 19th century Greek Revival rowhouse into a glass-fronted luxury condo building. Though The Fantasticks was eventually revived in 2006, 181 Sullivan Street cannot so easily be brought back to life.

In the 1830s, the east side of Sullivan Street Street (known as Varick Place until the 20th Century) between Bleecker and West Houston Streets was developed as a row of handsome Greek Revival rowhouses. Number 181 saw use as a blacksmith shop with apartments above by the turn of the twentieth century. And by the time Prohibition rolled around in the 1920s the blacksmith was out and a speakeasy was in.

Jimmy Kelly — born John De Salvio on the Lower East Side — had a career as a boxer and manager before he turned to night clubs in the 1910s.  Kelly was also an important captain in the Village Tammany Democratic machine. He opened his eponymous venue at 181 Sullivan Street in 1921.  The Times noted, it was his “Blue Ribbon 100-minute Floor Show”… through which Mr. Kelly’s boys and girls (but chiefly girls) stamp, tap, croon, harmonize and contortion-dance their way without pausing for a long breath” that had the customers packing in to small space. 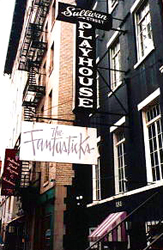 By the 1950s Kelly had passed away and by 1958 the building was re-purposed as a theater space. When Harvey Schmidt and Tom Jones (no relation to the Tom Jones of It’s Not Unusual fame) were looking for an off-Broadway space to produce their new musical The Fantasticks, they were connected to the new owners of 181 Sullivan Street. They premiered their first show on May 3, 1960, and though originally booked for a six-week run at $350 a week (thankfully with an option to renew), the musical ended up going strong for 42 years. Such notable actors as Jerry Orbach, Liza Minnelli, Elliott Gould, F. Murray Abraham, Glenn Close, and Kristin Chenoweth all had roles in The Fantasticks over the years.

When original run of The Fantasticks ended and the Sullivan Street Playhouse went dark, GVSHP and others opposed plans that would radically alter the building by replacing its historic facade and interior with glass-clad condo units. 181 Sullivan Street was part of GVSHP’s proposed South Village Historic District — the historic area south of Washington Square Park that contains remarkably intact tenements, rowhouses, and institutional buildings that tell the story of the last great wave of immigration to New York and the United States at the turn of the last century.

Though it was too late for the Sullivan Street Playhouse, we were able to finally get the City to landmark our proposed South Village Historic District in phases — in 2010, in 2013, and in 2016 — protecting more than 650 buildings on several dozen blocks south and southwest of Washington Square.  Of course we still have much more work to do, so if you want to help with one of our current preservation campaigns, click here, or support our work here.

4 responses to “Sullivan Street Playhouse: Gone But Not Forgotten”