Pigeons shake their wings on the copper church roof
out my window across the street, a bird perched on the cross
surveys the city’s blue-grey clouds. Larry Rivers
‘ll come at 10 AM and take my picture. I’m taking
your picture, pigeons. I’m writing you down, Dawn.
I’m immortalizing your exhaust, Avenue A bus.
O Thought! Now you’ll have to think the same thing forever!

For more than forty years, from 1952 until his death in 1997,  Allen Ginsberg, one of the most prolific writers of the Beat Generation, lived and worked in the East Village. 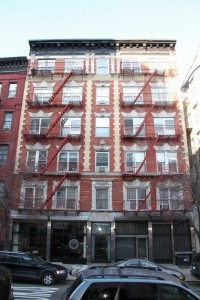 The poem above was penned by Allen Ginsberg  from his apartment at 437 East 12th Street between First Avenue and Avenue A, where he lived from 1975-1996.  Directly across the street was the Roman Catholic Church of Mary Help of Christians, with the copper roof described in this poem and referenced in other works by Ginsberg.

It is hard to think of the East Village without reflecting on all of the counterculture, artistic and social movements that took place here.  Certainly, the legacy of the Beat Generation lives on in the spirit of the area as well as in its historic buildings like the former Frank Stella studios at 128 East 13th Street, the Anthology Film Archives, and the Pyramid Club at 101 Avenue A in the proposed East Village/Lower East Side Historic District.

As a poet Ginsberg was a major part of one of the most important literary movements in this country but he was also known as a staunch advocate of free speech and an early proponent of sexual freedom and gay rights. If you’re interested in sites connected to LGBT history, look here.  Ginsberg and his friends and fellow Beats Jack Kerouac, Gary Corso and William S. Burroughs moved to the East Village in the early 1950’s and their experiences and adventures here were well documented, often through Ginsberg’s own camera lens.  The New York Public Library has a great map showing the locations of Ginsberg’s former residences in the East Village, here.

You can learn more about the Beats and the Village, the residence of jazz legend Charlie Parker and the Stonewall Riots on our resource page.  If you’d like to walk in the  footsteps of another great poet check out our Dylan Thomas walking tour.

7 responses to “The East Village’s Own, Allen Ginsberg”