“The only people for me are the mad ones, the ones who are mad to live, mad to talk, mad to be saved, desirous of everything at the same time, the ones who never yawn or say a commonplace thing, but burn, burn, burn like fabulous yellow roman candles exploding like spiders across the stars.”
―Jack Kerouac, On the Road

Today is Jack Kerouac’s birthday (March 12, 1922 – October 21, 1969).   Kerouac was an influential poet and writer who originated the term “beatific” as the defining term for the group of artists and writers of the Beat Generation including Allen Ginsberg, Neal Cassaday, and William S. Burroughs.

Kerouac spent a great deal of his life traveling, but like so many influential artists of the time he was also a significant part of the creative movements that took place in the Village in the 1950’s and 1960’s.

Jack Kerouac was a regular at The White Horse Tavern, a recipient of a 2006 Village Award from GVSHP, and one of the oldest bars in New York.  It was a favorite watering hole for bohemians and literary types in the 1950’s and 1960’s. 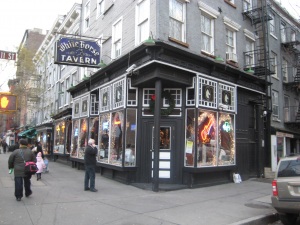 He was also a regular at a number of South Village venues on MacDougal Street including Minetta Tavern which was very popular with a number of notable writers including Dylan Thomas, Ernest Hemingway, and e.e. Cummings; the 1927 coffee house Caffe Reggio; and the Gaslight Café where Kerouac’s friends Allen Ginsberg and Gregory Corso often read their work. 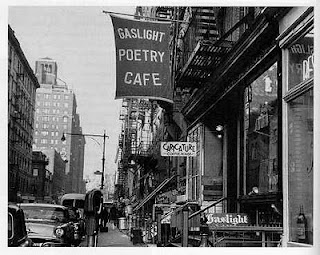 Jack also lived in The Marlton House at 3 West 8th Street in the Greenwich Village Historic District.  He penned Tristessa while staying at this former SRO that has been converted into a hotel.

Kerouac’s work is notable for his experiential way of conveying his personal experiences and for his desire to employ the techniques of jazz music in the rhythm and meter of his writing.

For more about Kerouac’s legacy in our neighborhood, watch the video of our Jack Kerouac literary pub crawl.