The Village is full of beloved landmarks and winding streets familiar across the world.  However, one of the wonderful things about being involved with this vibrant community is discovering the spots cherished by local residents. Father Fagan Park, located at the southeast corner of Sixth Avenue and Prince Street in the South Village, is one such place. The wedge-shaped property was created as a result of the extension of Sixth Avenue beginning in 1925 and the de-mapping of the southern terminus of MacDougal Street (you can read more about that expansion and see a historic street map in an Off the Grid post from last year). 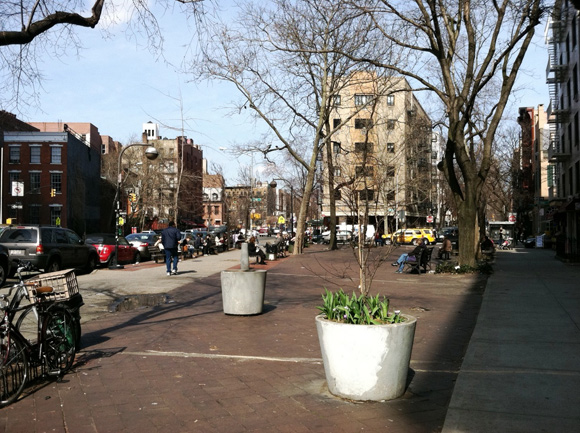 At last week’s Parks, Recreation and Open Space Committee meeting held by Community Board 2, residents came out to discuss the proposed reconstruction of the park with representatives from the NYC Parks Department. The room was full of interested community members who each took turns contributing their ideas for the future of the park, which included preserving the large number of benches provided in the park and hopes for more greenery.

Father Fagan Park was named for Father Richard Fagan, who was born in Rio de Janiero in 1911 and was ordained as a Franciscan priest in 1935. He served as an associate pastor at St. Anthony of Padua Church on the nearby corner of Sullivan and Houston Streets beginning in 1936 and lived at the rectory at 151 Thompson Street, both of which are part of our proposal for a larger historic district in the South Village. In the early morning of November 4, 1938, a fire broke out at the rectory. Though Father Fagan managed to escape, he went back into the building twice to rescue Father Louis Vitale and Father Bonaventure Pons. With the fire out of control, the badly burned Father Fagan leaped out a window onto the roof of the adjacent Settlement House. After being discovered, he was taken to the hospital where he died of complications five days later at the young age of 27.

The park also commemorates three firefighters of Ladder Company 5 and Engine Company 24 – Captain John J. Drennan and Firefighters James F. Young and Christopher J. Siedenburg – who responded to a fire at 62 Watts Street on the night of March 28, 1994 and died instantly or shortly thereafter as a result of being trapped by the flames. That same year, three Callery Pear trees were planted and three bronze plaques were installed to commemorate these heroic men. 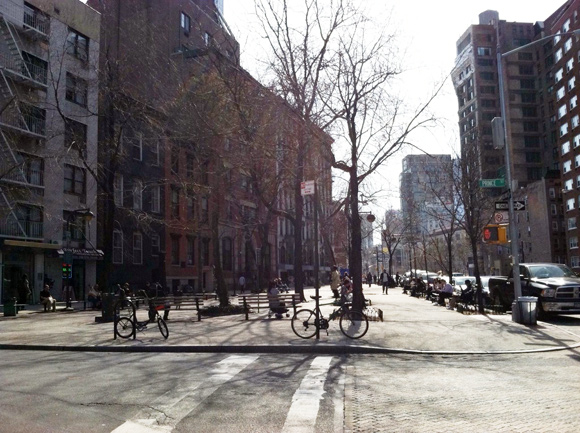 One of the suggestions at the community board meeting was to recognize the sacrifice of Father Fagan and the three firefighters in the reconstruction of the park, which is estimated to begin in two years with $1.5 million allocated by the City Council. Most residents also hope that the open space “piazza” feel of the park is preserved and that lighting is improved. Above all, the park is loved as a place where residents, workers and tourists alike enjoy their lunch or some time off their feet and where children enjoy the rare urban experience of outdoor communal playtime.

A date for the Parks Department’s presentation of their design proposal for the park to the community board has yet to be scheduled, but be sure to check the board’s calendar if you are interested in weighing in on the future of this invaluable neighborhood open space.

One response to “The Heroism Behind Father Fagan Park”