There’s lots to love about the culture, architecture, and history of the East Village, and the Fourth Arts Block (East 4th Street between the Bowery and Seond Avenue) is a microcosm of the neighborhood’s layered history, distinctive architecture, and cultural innovation.  The Fourth Arts Block, a 2011 Village Award Winner, is one of only two recognized cultural districts in New York City, a well deserved recognition of it being a longstanding center of performing arts and culture in the East Village. Iin the following Q & A Tamara Greenfield, Executive Director of the Fourth Arts Block, tells us about East 4th Street, the history of arts in the East Village, and some of FAB’s new projects.

Tamara, tell us a little about the Fourth Arts Block and how it came to be what it
is today?

Fourth Arts Block (FABnyc) was founded in 2001 as a coalition of arts & community groups
working together to save their homes on East 4th Street, where many had been based for several
decades. Founders included La MaMa (an individual New York City Landmark), New York
Theatre Workshop, WOW Café Theatre, Teatro IATI, Rod Rodgers Dance Company, Cooper
Square Committee, and many more.

FABnyc developed a unified plan that would keep all the founding groups on the block and
eventually double nonprofit cultural space. After years of negotiation and advocacy, in October
2005, the City sold our members 8 properties for $8 and designated it an official Cultural District
– the first in Manhattan and one of only two in the city. More than $20 million has been invested
and committed to renovate the arts buildings (that’s why there is so much scaffolding!)

Even though we’re most closely affiliated with East 4th Street, FABnyc is actually now a
neighborhood-wide coalition of arts and community groups supporting neighborhood
development while preserving the LES’ rich heritage and creative energy.

The City has only designated East 4th Street and BAM (Brooklyn Academy of Music) as “official” cultural districts. The most important benefit of this designation is the preservation of historic cultural facilities that will continue to serve artists far into the future. Otherwise, FABnyc uses the designation to help us access public resources and support – street closings, streetscape improvements, collective funding & investment.

The cultural district label also helps draw attention to the exciting cluster of smaller cultural groups who can disappear in a city this size. We are particularly proud to be helping to preserve artists and groups that have community connections stretching back 50 years, while continuing to provide opportunities for young, diverse artists from all over the city and world.

We hope that the work that we are doing on 4th Street will have applications to other neighborhoods that want to support networks of independent artists and small cultural groups. We know there are dozens of actual cultural districts in NYC even if they have not been made “official” yet.

The East Village has a long history of being a mecca of the arts, culture, and performance. How do you think that legacy continues today and why do so many arts groups end up here?

I think the East Village/LES is an incredibly rich ecosystem for the arts made up of cultural organizations, arts spaces, gardens, artists, and activists. New generations of artists continue to pass through the neighborhood’s cultural spaces for training, performances, exhibition, and networking. I’m not sure if there is any other neighborhood in the city that hosts more arts festivals or open mic nights! And somehow no matter where they live now, there are a lot of NYC artists that see this neighborhood as their cultural homebase. We hope that we can help keep this spirit alive for decades to come.

We know a lot about the neighborhood’s history but I’m sure that you have some great anecdotes about the Fourth Arts Block. Anything you’d like to share? 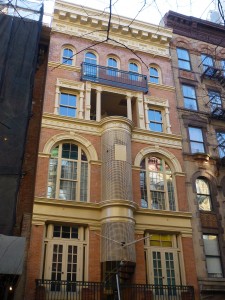 Buildings on East 4th Street have been home to cultural and social activism for over 100 years, including German music societies, Italian theaters, Yiddish publishers, Union organizing, film & television sound stages, Puerto Rican and Ukrainian social halls, and drag clubs – most of which pre-dated the development of the experimental theater & performance scene we know today.

Each building has a history worth exploring, but 62 East 4th Street is a particular favorite. People stop every day and point out its distinctive façade with the circular fire escape on the front, which was recently restored beautifully by the City. The building was built in 1889 as a dance and catering hall with restaurants on the bottom floors, meeting halls on the next two floors and residences on the top stories. In the 1930’s, the dance hall was converted into a theater stage. In the 1960’s, Andy Warhol rented the Fortune Theater and ran “Boys to Adore Galore” and other great programs. In the 1970’s, Francis Ford Coppola used the theater as a setting for The Godfather: Part II. Today, the building is home to Duo Multicultural Arts Center and Rod Rodgers Dance Company, hosting dance classes and residencies, theater productions, film screenings, and art installations. The building has great soul.

The Fourth Arts Block is very innovative. Tell us about some new initiatives you’re working on.

FABnyc recently initiated FAB LAB, a new program that establishes our community-based network as a testing ground for collaborative solutions to challenges faced by artists, small cultural and community groups. For example, we are working with a wide range of partners to connect culture and sustainability, most recently by becoming the “Model Block” for the Manhattan Borough President’s Go Green Lower East Side Initiative. This past year, we worked with White Roof Project and Cooper Square Mutual Housing to coat over 30,000 square feet of roofs with reflective paint, helped cultural groups get energy assessments and upgrades, and produced two creative recycle/re-use events for artists with GrowNYC and WeRecycle.

We are excited to make creative connections where they often aren’t made.

The weather is getting warmer and we all want to be out and about. If someone wanted to plan a visit to the Fourth Arts Block where would you recommend they start?

Great question! I definitely encourage folks to stop by the FAB Café (75 East 4th Street) for a cold drink anytime and to pick up information about upcoming shows or hang out and meet local artists. In August, we will be closing the street down for two weekends during the FringeNYC Festival and creating a giant outdoor café. Then come back for our annual FAB! Festival on September 22nd for free theater, music & dance, giant puppets, free classes & tours, and a local artisanal market. There is always a lot to do in the LES!

Please be sure to check out fabnyc.org for information on performances and events on East 4th Street.

To learn more about sustainabiklity and historic buildings you should attend our upcoming lecture, “Green Buildings: A Lecture by Architect Jean Phifer,” on Thursday, April 19th.  And, speaking of the Village Awards we are accepting nominees until April 16.  You can find more information about submissions here.