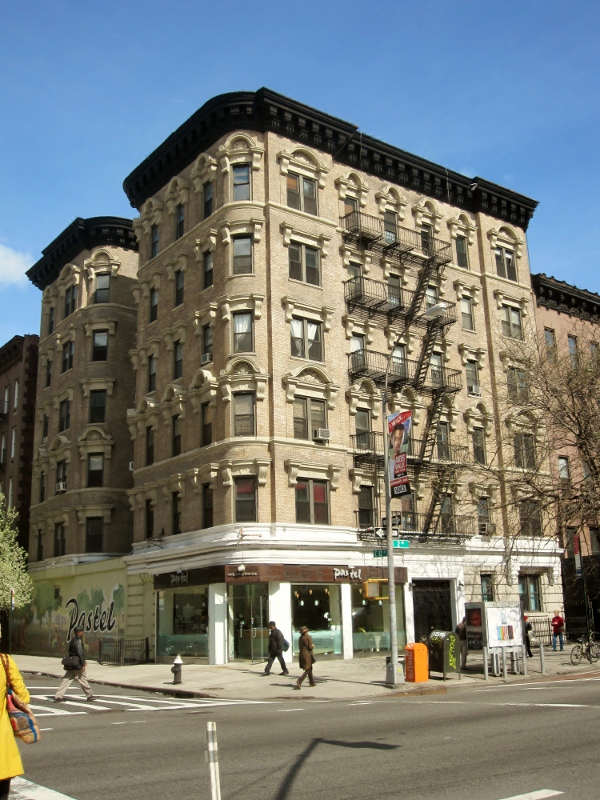 We always thought the building at 193 Second Avenue at the corner of 12th Street was extraordinarily handsome and well-designed. Based on our extensive research of the East Village we learned a lot more about the building owners, architects and some of its notable residents.   It is said that the building was designed to house performers of Yiddish theater, which would make sense given its prime location on Second Avenue which was once known as the Yiddish Rialto.  But the building’s notoriety extends well beyond that. 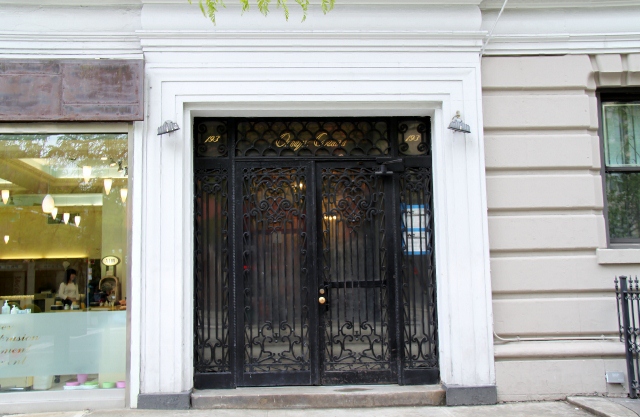 Known as Onyx Court, the building was constructed in 1902 by Morris Berman and Joseph Moskowitz of East Side Realty at 393 Grand Street for $90,000. The building retains much of its original features including heavy neoclassical window pediments, elaborate fire escapes, and door gates that borrow heavily from the art nouveau style. Unlike surrounding tenements Onyx Court had spacious apartments and was one of a small but growing number of apartment buildings meant for the middle and upper classes.

No. 193 Second Avenue was designed by architects Harde & Short,  (Herbert Spencer Steinhardt & Richard Thomas Short) who would later design some of New York’s most lavish apartment buildings, the Red House (1904) at at 350 West 85th Street and Alwyn Court (1907-1909) at 12 West 58th Street, both individual New York City Landmarks.  These buildings are distinguished by their striking use of architectural terra cotta.  If you’re interested in learning more about this topic,  please be sure to reserve your place at our May 1 lecture, Greenwich Village: A Century of Architectural Terra Cotta A Lecture by Susan Tunick.

So what about Oscars, opera and Orson Wells?

Well, Onyx Court was home to a number of prominent actors,performs and musicians associated with Yiddish theater.  Among them, Sidor Belarsky (1898-1975) born Isidor Livshitz, a Ukranian immigrant who lived in the building shortly after his arrival in the United States in the 1930’s.  Belarsky was a renowned opera singer who sang with the Chicago Civic Opera Company, the San Francisco Opera Company, The American Opera Company of Los Angeles, the New York City Center Company, Teatro Municipal in Rio De Janeiro and Teatro Colon in Buenos Aires.   In addition to classical opera, Belarsky performed and recorded Yiddish folk songs including, “Dem Milners Trern” (“The Miller’s Tears”), a song about the expulsion of Jews from Russia.  Listen to it here

Oscar winning composer Bernard Hermann (1911-1975) was raised in Onyx Court.  Before launching his career in composing for film, Hermann worked with Orson Welles arranging scores for his radio broadcasts.  He would later work with Alfred Hitchcock developing the scores for the director’s films including Psycho, North by Northwest and Vertigo.  Interestingly, Hermann’s final score was written for Martin Scorsese’s film Taxi Driver in 1975, which had a number of scenes shot on East 13th Street between 2nd and 3rd Avenues, a block away from Hermann’s boyhood home.

If you want to learn about researching NYC building we suggest you start with our resource’s page which has great information the history of the Village, links to designation reports, and a research guide.

One response to “Oscars, Opera and Orson Welles at Onyx Court”