Today is the 108th anniversary of the General Slocum disaster.  The greatest loss of life in New York City before 9/11, this singularly important event had a particularly profound impact on the East Village.

On the morning of June 15, 1904 the steamship General Slocum set off on a journey to the Locust Grove Picnic Ground on Eatons Neck, Long Island with more than 1300 parishioners from the German Evangelical Lutheran Church of St. Mark at 325 East 6th Street.

This church is now the Sixth Street Community Synagogue and is included in the proposed East Village/Lower East Side Historic District.  Listed on the State & National Register of Historic Places (the full report can be read on our Resources page) it was built in 1847 as the Evangelical Lutheran Church of St. Matthee and ten years later became the German Evangelical Lutheran Church of St. Mark.  In 1940, the church was converted to a synagogue.

For 17 years this picnic was a joyous annual event.  But midway through the journey to Long Island in 1904 it came to a tragic end when the ship caught fire and then sank off the shore of North Brother Island near the Bronx.  More than 1000 lives were lost.  Read this post for more details about the disaster and other sites in the East Village connected to the event. 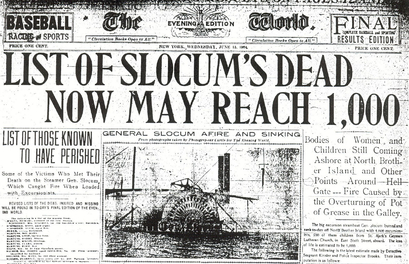 There are still many sites in the East Village that remain from the days when it was known as Kleindeutschland or Little Germany some of which like Community Synagogue are included in the proposed East Village/Lower East Side Historic District.  This includes the Pyramid Club at 101 Avenue A which was formerly a German Social Hall and Beethoven Hall at 210 5th Street.  Here is a link to a map of the proposed district.

The Landmarks Preservation Commission will have a public hearing on Tuesday, June 26 at 3:30 p.m. at the Municipal Building at 1 Center Street in the 9th Floor Hearing Room.  This is a very important hearing and you can help by attending the hearing and testifying in support of the proposed district or sending testimony to the LPC.   We have a sample letter you can use with contact information here.