Nestled in the middle of a block of 11th Street between Avenues A & B are two tenements that share their history with one of the most well known and architecturally distinctive synagogues in New York City. 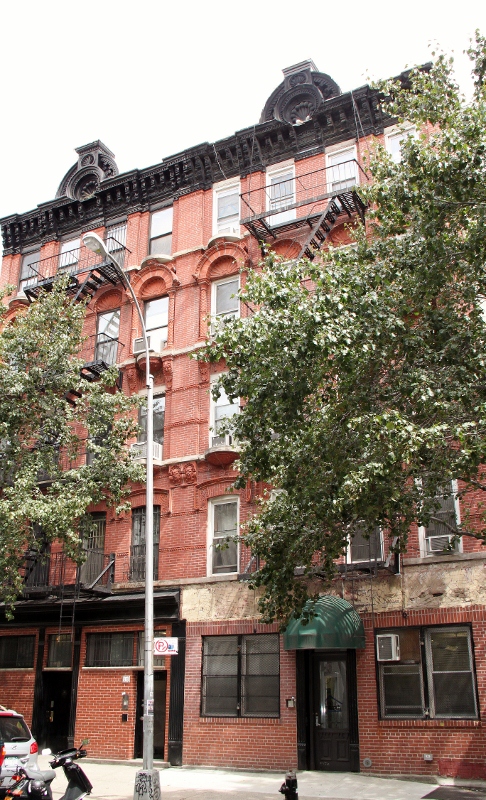 It is no coincidence that the tenements at 517-519 East 11th Street share some architectural details with the Eldridge Street Synagogue, a New York City Landmark that is also a National Historic Landmark, now known as the Museum at Eldridge Street.  The Eldridge Street Synagogue was one of the first purpose-built synagogues in the Lower East Side, unlike the Congregation Mezritch Synagogue at 415 East 6th Street and the Sixth Street Community Synagogue in the proposed East Village/Lower East Side Historic District, which were originally built as other kinds of structures and later became synagogues.

The two buildings on East 11th Street were part of a trio designed in 1888 by architects Peter and Francis William Herter, German Catholic immigrants who had only been in New York City for a few years before receiving the commission for the Eldridge Street Synagogue in 1887. The popularity of the synagogue design would propel their careers and in the following years the Herter Brothers would design some 60 tenements in Lower Manhattan, primarily in the Lower East Side.

A number of the buildings designed by the Herter Brothers remain including 375 Broome Street and 166 Henry Street which have features similar to the buildings at Nos. 517 & 519 on 11th Street –  arched windows with terra cotta shells in the arch caps, ornate string courses, highly sculpted brackets and of course the all-distinctive rounded arch cornices which echo the form of the horseshoe arches of the Eldridge Street synagogue.

The buildings on East 11th Street were owned by developer Asher Weinstein and he and the Herter Brothers partnered on the development and design of many tenements in the Lower East Side as well as other buildings throughout the city.  Peter Herter considered his firm’s designs for tenements of a better quality than the standard and therefore better for the tenants.  He and architect Ernest Flagg, designer of the building that houses our offices as well as the Mills House No. 1 in the South Village, had an editorial debate in the Real Estate Record and Guide in 1900 about the design of tenement houses.

The East Village is full of architecturally and culturally distinctive sites, like these buildings,  that are not protected by landmark designation.  Though the Landmarks Preservation Commission held a hearing for the proposed East Village/Lower East Side Historic District in June they have not scheduled a vote which means that buildings in the neighborhood many be lost or unsympathetically altered.  To encourage the LPC to vote now to preserve this neighborhood, you can use this sample letter.