As we have covered in past Off the Grid posts, the South Village building at 186 Spring Street holds strong historical significance for its role in the Lesbian and Gay Civil rights movement and the early fight against the AIDS epidemic. We presented this information to the Landmarks Preservation Commission (read our letter HERE) in the hopes that the building would be considered for individual landmark status even though the building owner plans to demolish it. Unfortunately, the LPC responded that they felt building had been too altered to be considered, and sent us a letter explaining their reasoning (read their letter HERE). 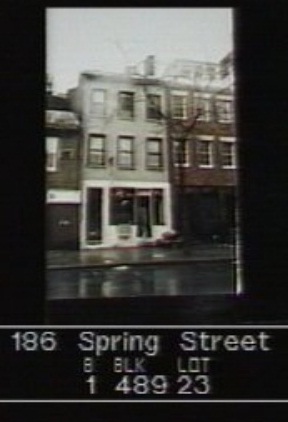 This rationale for turning down the house for landmark designation is inconsistent.  The LPC has designated much more highly compromised buildings even just within the last few years and within a few feet of this site (see HERE). But also given that, by the LPC’s own admission, the historically significant events and figures associated with the house date to the 1970s and early 1980s, it is that era of the house’s life to which its present-day condition should be compared, not to how it looked when it was built in 1824. It is virtually identical to how it looked in the 1970s when multiple leading figures of the gay rights movement lived here in what was called a “gay commune”.  This is the criteria the LPC has used when designating other sites, such as the Louis Armstrong House and the Charlie Parker Residence, and this is the criteria that should be used here.

Below is a letter from architectural historian Andrew S. Dolkart to the LPC which raises exactly these points. Mr. Dolkart is the co-author of the LPC’s own book Guide to New York City Landmarks, the author of numerous New York State and National Register Nomination reports and New York City landmark designation reports, the Chair of the Historic Preservation Program at Columbia University, and considered by many to be New York City’s foremost architectural historian.

I have read your letter of August 15, 2012 addressed to Andrew Berman relating to the proposal to hold a public hearing on 186 Spring Street.  I find the letter to be puzzling and hope that you will reconsider your decision.

If the issue regarding the designation of 186 Spring Street were purely about the architectural quality of the building, I would fully agree that the building has been altered and that this raises questions about its architectural integrity and the criteria for designation.

However, in recent weeks an enormous amount of information has been assembled that attests to the cultural significance of the building, specifically to the lesbian and gay community.  In your letter, you note that the staff committee has concluded that “the events and figures associated with 186 Spring Street are historically significant,” yet also reiterated the fact that the building lacks the “requisite architectural integrity to warrant recommending” the building for review by the full Commission.  In this case, I do not think that the two findings are related.

I think that we can draw a parallel with the commission’s designation of the Louis Armstrong House.  This house had lost its original architectural integrity.  But this architectural integrity was not an issue of concern at all.  The building was designated because of its association with Armstrong and it looked, at the time of designation, much as it had during Armstrong’s life.  Indeed, were 186 Spring Street designated as a landmark for its cultural significance, it would be inappropriate to undertake a restoration back to its original Federal style character.

Another issue that I am sure is of concern to the Commission is that of stepping in and stopping a development already underway.  There are examples in the history of the Commission, most notably the efforts to save the Coty and Rizzoli Buildings on Fifth Avenue, when an initial decision was made not to hold a public hearing, but this was changed when new information was brought to light about the significance of the buildings (in that case, relating to the Lalique glass).  I believe that this is the case with 186 Spring Street, where a great deal of information has been assembled relating to the modern lesbian and gay rights movement.

I hope that the staff committee will reassess its position on this matter, taking into consideration that the building fully retains its integrity from the period that the Commission staff agrees is of historical importance.