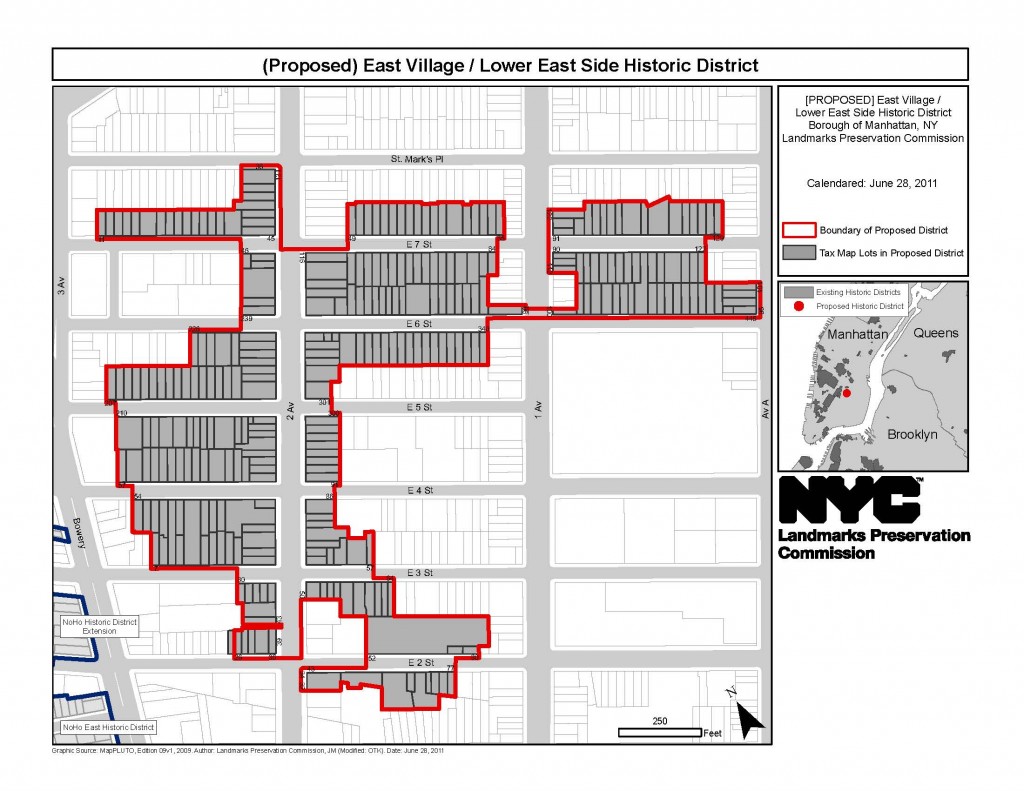 We recently learned that the proposed East Village/Lower East Side Historic District has been scheduled for a vote by the Landmarks Preservation Commission on October 9.  Since the district was announced nearly a year and a half ago, GVSHP and other preservation advocacy and community groups have pressed for the LPC to designate the proposed historic district quickly to prevent inappropriate alterations, demolitions, and additions to buildings in the proposed district.

At the urging of GVSHP and other groups the LPC expanded the boundaries of the East/Village Lower East Side Historic District which includes hundreds of buildings that represent the history of the area including early rowhouses, tenement buildings, commercial, institutional buildings.

At the end of June the Landmarks Preservation Commission held a public hearing for the proposed district where a majority of the speakers were in favor of the designation.  Elected officials including recent Village Awardee Councilmember Rosie Mendez, State Senators Duane and Squadron, Assemblymembers Glick and Kavanagh, and Manhattan Borough President Stringer sent representatives to speak in favor of the district.  In addition to GVSHP (read our testimony here), other community and preservation groups including the Historic Districts Council, the New York Landmarks Conservancy, the East Village Community Coalition, the Lower East Side Preservation Initiative, Bowery Alliance of Neighbors, Place Matters/City Lore, the Cooper Square Committee, Cooper Square Mutual Housing Association (the owner of 19 properties in the district), and the Metropolitan Chapter of the Victorian Society of New York also spoke emphatically in favor of the designation, calling out the neighborhood’s rich history, significant architecture, and cultural depth as well as its vulnerability to inappropriate and out of scale development.  Not to mention many residents of the East Village who spoke from the heart about the neighborhood and why it should be protected.

To learn more about landmarking, historic districts, and what this means for the neighborhood and building owners we suggest you read some of the following from GVSHP’s Resources Page:

Historic Preservation 101: What is a Landmark?

We are hopeful that on October 9 the LPC will vote in favor of designation for this district, one of the most architecturally, culturally, and socially significant areas in Manhattan.  If you would like to see this area protected with landmark designation please send a letter to the LPC before, October 9, expressing your support.  You can find contact information and a sample letter here.