Next in the Map It! series is an unusual quirk in our streetscapes that few people may have noticed.  In fact, it wasn’t until last week when I was looking at the Sanborn map for block 576 that I happened to spot this strange deviation in a neighborhood where idiosyncracies are already the norm.

So this week, we’ll take a look at how the old Minetta Brook shaped property lines and buildings in Greenwich Village.

The highlighted portion on the Sanborn map above shows the path of the old Minetta Brook, which once ran through Greenwich Village and flowed out to the Hudson (or North) River. As you can see from the topography map at left, a section of the brook began just north of present-day Union Square and made its way through Washington Square.

Today’s Minetta Street and Minetta Lane are named for this waterway; Minetta Street more or less follows its path. It also ran through present-day Hudson Square, which you can learn more about here.

When comparing this map to the Sanborn map above, you can see the brook’s pathway in a broader context. For this post, we wanted to look closer at how the brook has affected a few lot lines on block 576, which is bounded by West 12th and 13th Streets and Fifth and Sixth Avenues. Can you find other lots? We’d love to know!

The 1811 Commissioner’s plan dictated that all lots be 25 feet in width, which was the typical width of a single-family home at that time. The Sanborn map shows how later development changed this standard lot size, as developers purchased multiple lots and built larger buildings.

Two buildings that we’ll be focusing on today are 45 West 12th Street and 36-40 West 13th Street. At the northern edge of the Greenwich Village Historic District, block 576 is more or less cut in half by the boundary lines of the district (view a map of these boundaries here; maps of other historic districts in our catchment area can be found on our Historic Districts and Sites page). Because of this, only 45 West 12th Street is protected by landmark designation.

According to the designation report (which can be found on our Resources page), 45 West 12th Street was built in 1846 for one Mrs. Elizabeth Calhoun. On the Sanborn map, this building is just to the left of the highlighted pink line, at the bottom of the block. It might be a little difficult to see, but the lot has a very unusual shape! And this is where Minetta Brook comes into play. Long after it disappeared from street view, the impact of the brook is still (less obviously) evident today. 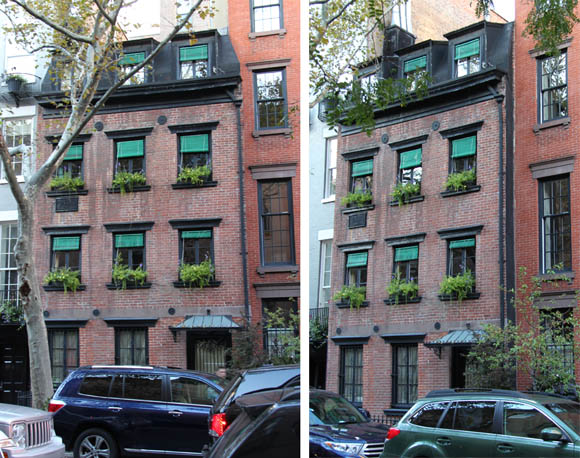 The building entry remarks on the brook’s influence in shaping 45 West 12th Street: “This charming little brick Greek Revival house…is an early example of the entrance door placed almost at street level, in all probability the result of the unusual pie-shaped lot. The diagonal line of its east wall follows the approximate course of the old Minetta Brook.” It goes on to read, “The circular plates for two tie-rods above the third floor window lintels bear mute evidence to the need for strengthening this gore-shaped house.” You can read more about this building’s features in the designation report.

In the photos above, the angled east wall is evident in the roofline, which juts out in front of its brick neighbor to the east. The second photo shows this protruding wall (the vertical black line). 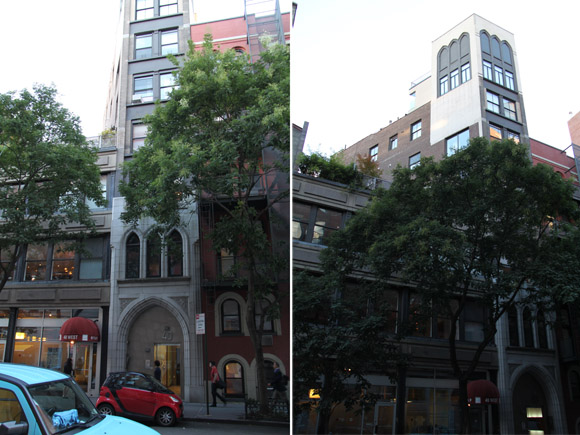 On the north side of the block sits 36-40 West 13th Street. Located just outside of the historic district, information about these buildings is sparse. These were originally two separate buildings that have now been joined as condominiums. The new building permit for the 3-story building indicates that it was constructed as a store and loft space in 1913 for one Timothy Kieley of 246 Waverly Place; it was designed by William J. Dilthey who had an office at nearby 1 Union Square. GVSHP is currently undergoing permit research in this area and looks forward to uncovering more about the taller building soon!

As the photos above indicate, the angled east wall of the tall, narrow building follows the line that was shaped by the old Minetta Brook. This is also the case for the adjacent 3-story building, though that is really only evident by looking at the Sanborn map above or a Google Satellite map.

The 1854 Perris map reveals what existed on this oddly-shaped lot before the two buildings at 36-40 West 13th Street were built. Here you can see that a number of brick and wood-framed buildings were located on those lots (note that the building numbers on this map have since been changed). The New York Public Library’s Map Division has an incredible collection of maps for the public to enjoy, and its staff has even begun to make a number of those maps available online.

GVSHP hosts a number of great programs throughout the year, and we recently held a walking tour of Minetta Brook called “The Lost Stream of the Village” that was led by urban explorer Steve Duncan. See photos of this event on our Flickr page and check out our upcoming programs on our Events page. We hope to see you at an event soon!

One response to “Map It! Lots Shaped by Minetta Brook”