As GVSHP recently announced, the Hudson Square rezoning application is now on the desk of the Manhattan Borough President,  after Community Board #2 pointedly recommended it be turned down UNLESS the neighboring South Village is protected from its impacts through landmarking, allowable building heights in Hudson Square are reduced, and other changes made.  Like GVSHP, Community Board #2 WANTS a rezoning of Hudson Square, but wants it done right. 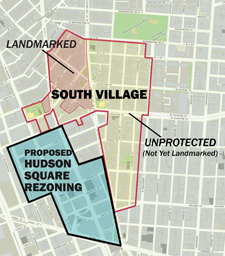 Borough President Stringer must issue his recommendation within the next few weeks, and City Planning appears likely to hold its hearing on November 28th.  But the ultimate decision will come down to the City Council, and specifically Speaker Quinn, within whose district it lies.

In light of this, you might be interested in this piece recently published in Westview News, outlining what’s at stake, and how Speaker Quinn will shape the final outcome.

(You can send letters to city officials about Hudson Square and the South Village HERE.)

By Andrew Berman, Executive Director of the Greenwich Village Society for Historic Preservation

A rezoning application currently undergoing public review for the Hudson Square neighborhood (Houston Street to Canal Street, 6th Avenue to Greenwich Street) will have an enormous impact not only on the future of that 22 block, largely commercial area, but on the adjacent low-rise, historic and residential South Village neighborhood, east of 6th Avenue between Watts Street and Washington Square.

If Trinity Realty, which owns 40% of the property in the area, has its way, Hudson Square will become Manhattan’s next “it” neighborhood; rezoning would for the first time allow large scale residential development, turning the neighborhood into a 24-hour community with a much more vibrant retail mix than currently exists. Their goal: to not only attract thousands of new residents to the area, but to make it more attractive to commercial tenants, to fill huge converted early 20th century loft buildings that have some of the highest office vacancy rates in the city.

There is almost universal agreement that the zoning for Hudson Square should be changed – it allows awful buildings of the size and scale of Trump SoHo and mostly encourages hotel development. There has been vigorous debate about how exactly the area should be rezoned, and whether Trinity’s proposed height limits for new buildings, allowing them to go as tall as the Trump SoHo in one case, should be lowered. What there is little debate about, however, is that rezoning Hudson Square will almost undoubtedly attract new and greater development, which will in turn increase development pressure on the adjacent, very low-rise, South Village.

Also undeniable is that the South Village is experiencing huge development pressure as it is, and we have seen historic building after building undermined in recent years. From the Provincetown Playhouse and Apartments in its north to the Art Deco Tunnel Garage on Thompson and Broome Street at its south, from the 1862 row house at 178 Bleecker Street to the 1824 row house just a block from the rezoning boundary at 186 Spring Street, all have been destroyed in recent years due to lack of landmark protections. The Greenwich Village Society for Historic Preservation and a broad array of community and preservation groups have been asking for this area to be landmarked for ten years. While the City has refused to act, after initially promising it would, they have been quite willing to accommodate NYU and other developers who have sought zoning changes nearby to benefit them.

However, the final outcome here remains to be seen. Unfortunately, conventional wisdom says that it is virtually a foregone conclusion that neither the City Planning Commission nor the Landmarks Preservation Commission, both controlled by the Mayor, will respond to community concerns about either the height of proposed development in Hudson Square or the need to protect the adjacent South Village. So it will come down to one person: City Council Speaker Christine Quinn, who represents the area.

The City Council must also approve the rezoning, so Quinn has the power to change its provisions and make the proposed height and bulk allowances in the rezoning more in line with the character of the neighborhood.

Yet no matter how carefully refined the outlines of the Hudson Square rezoning are, they will still increase the development pressure upon, and hasten the destruction of, the neighboring South Village, unless landmark protections are put in place. In addition, while the Speaker cannot enact landmark designations unilaterally, she is undeniably in a position to make the City do so.

The Landmarks Preservation Commission is dependent upon the City Council for everything from its funding to approval of any landmark designation it makes. Furthermore, City Hall clearly wants the Hudson Square rezoning to take place and it cannot happen without the City Council’s approval. Combine that with the multitude of other ways in which the Mayor, who controls the Landmarks Preservation Commission, depends upon the City Council to approve almost any major initiative he undertakes, and it becomes clear that the Speaker can ensure that the South Village is given necessary landmark protections in conjunction with the Hudson Square rezoning.

Will Speaker Quinn use the political muscle necessary to make this happen? We have to believe she will; it’s certainly not without precedent for her to do so. In 2005, when the city rezoned West Chelsea, also in her district, she got them to designate a West Chelsea Historic District in a neighboring area to make sure the rezoning did not threaten its historic buildings. More recently, earlier this year, she got City Hall to agree to create a new school at 75 Morton Street, a project they had previously resisted for years, in conjunction with an enormously unpopular rezoning of the St. Vincent’s Hospital site.

So it’s clear the ability to do it is there. What we need to do now is ensure that the Speaker knows that her constituents want the South Village landmarked now and feel strongly that it is absolutely essential for that to happen in order for the Hudson Square rezoning to move ahead. You can do this by sending her a letter found on our website at gvshp.org/hudsqlet.