On November 22, 1918, the first performances were staged at the Village’s renowned Provincetown Playhouse in the theater company’s permanent home. Founded in 1915 in Massachusetts as the Provincetown Players by a group of writers and actors, the theater company moved its performances to an apartment at 139 MacDougal Street in Greenwich Village in 1916. Seeking more space, they leased a former bottling plant at 133-139 MacDougal Street in 1918 that was converted into its permanent home.

Located in the South Village, the Provincetown Playhouse staged the works of some of this country’s most well known playwrights and talented actors, including Eugene O’Neill, Edna St. Vincent Millay, Edward Albee, Sam Shepherd, David Mamet, Bette Davis, and Paul Robeson among others.  In addition to its incredibly talented authors and actors the theater is noted for being progressive – it had a large number of women involved in all levels of productions and boldly staged controversial plays featured African Americans actors. 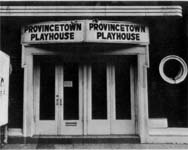 In 2008 NYU Planned to demolish the entire Provincetown Playhouse and Apartments building (which was the site of the original Provincetown Playhouse at 139 MacDougal Street, the more recent Playhouse at 133 MacDougal Street, and a series of interconnected bookstores, meeting place, cultural institutions, and apartments which scholars had called the “cornerstone of bohemia” and “the locus of cultural activity and the gathering places of all the figures associated with the Greenwich Village renaissance that began the era of Modernism in the U.S.”) save for the facade of the theater entrance to make way for a new law school building (read the NY State Historic Preservation Office’s description of the building’s historic significance HERE).  After GVSHP’s fierce advocacy and community outcry for the preservation of the Provincetown Playhouse NYU agreed to preserve a small portion of the building. Despite this commitment to the community, in August of 2009 NYU demolished nearly the entire building. 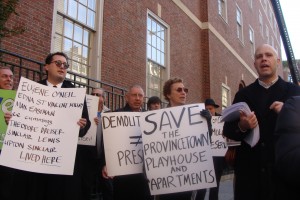 The Provincetown Playhouse is but one of many historic sites in the South Village could have been saved from demolition or unsympathetic alteration had they been in an historic district.  We continue to advocate for the Landmarks Preservation Commission to designate the entire South Village Historic District GVSHP proposed years ago.  Click here to find out more.

One response to “Bittersweet Anniversary for Provincetown Playhouse”