This Tuesday, Jeanne Manford died at the age of 92.  Sometimes referred to as the “Mother of the Straight Ally Movement,” Jeanne’s may not be a household name in all quarters, but her legacy and impact upon our broader culture is enormous.  And it has strong roots in Greenwich Village, and its early embrace of the gay rights movement.

Jeanne Manford founded what is today known as Parents, Families, and Friends of Lesbians and Gays, or PFLAG, a national organization currently with over 350 chapters and 200,000 members.  But according to PFLAG’s website, the organization started in 1972

when Jeanne Manford marched with her son, Morty, in New York’s Christopher Street Liberation Day March, the precursor to today’s Pride parade. After many gay and lesbian people ran up to Jeanne during the parade and begged her to talk to their parents, she decided to begin a support group. The first formal meeting took place in 1973 at a local church. 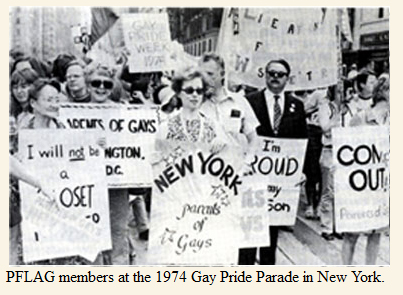 That local church was The Church of the Village at 13th Street and 7th Avenue, then known as the Metropolitan-Duane United Methodist Church.  Forty years ago, not many churches were willing to host groups dedicated to advocating for greater acceptance of lesbians and gay men, and not many people publicly embraced the identity of parents of lesbian and gay children.

But the Village had a long history of promoting acceptance of lesbians and gay men, and a considerable track record of embracing pioneers in fields from social justice to preservation to the arts and literature, and thus was fertile ground for the kind of organizing and culture-shifting Jeanne sought to undertake.

The simple gestures Jeanne Manford made forty years ago — calling upon families and society at large to understand and accept their gay and lesbian children, and to afford them equal rights and opportunities under the law — may seem quite mundane and obvious now.  But they were in fact brave and radical at the time.

You can read Jeanne Manford’s obituary in the New York Times HERE.  You can learn more about the Village’s LGBT history HERE.

4 responses to “Jeanne Manford, PFLAG, and the Village”