The intersecting streets at Sheridan Square and 7th Avenue South are some of the most well-known and well-worn in Greenwich Village. While surrounded by notable structures housing the likes of The Stonewall Inn and Village Cigars, one of the most prominent structures around the square is the fourteen-story apartment house at 10 Sheridan Square where Grove Street and West 4th Street meet. 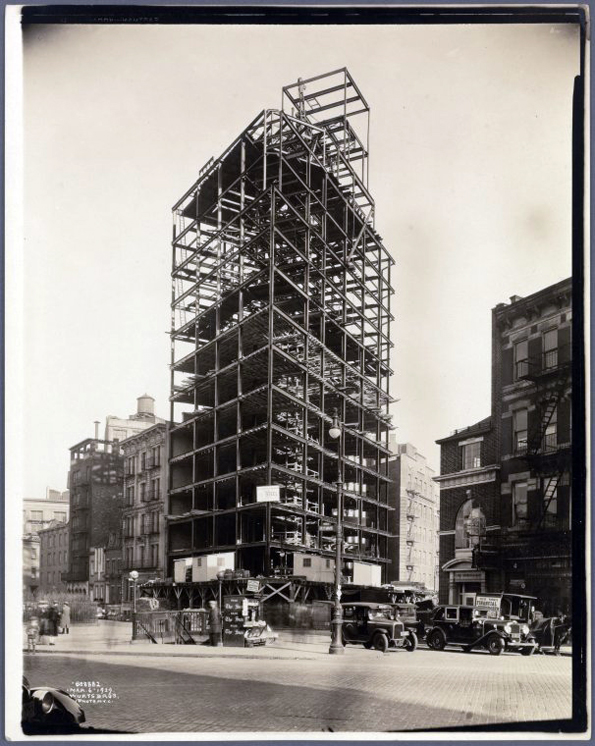 The New York Public Libary houses a great image of the construction of the residential tower from March of 1929. The Shenandoah, as the building is known, was designed by noted early-twentieth century architect Emery Roth. Roth is well known in New York City as the architect of some of the grandest (and priciest) residential and hotel buildings in the city. Many like the El Dorado, the San Remo, and the Beresford on Central Park West epitomize pre-War opulence and incorporate Neo-Romanesque and Beaux-Arts design. Roth also worked in the Village, and in addition to the Shenandoah, he designed 28 East 10th Street (Devonshire House), 59 West 12th Street, and 299 West 12th Street.

10 Sheridan Square was included in the original Greenwich Village Historic District when it was landmarked in 1969.

2 responses to “10 Sheridan Square: Then and Now”