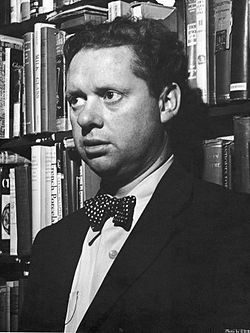 On this day in 1950, the Welsh poet and writer Dylan Thomas arrived in New York City.  Born in Swansea, Wales, Thomas left school at age 16 and became a journalist.  In 1934, he won a poetry contest, unofficially beginning his literary career.  Later that year his first book Eighteen Poems was published followed by a second book Twenty-five Poems in 1936.  At age 21, Thomas moved to London where he met his wife Caitlin Macnamara.  Their relationship was marked by alcoholism and unhappiness.  According to the History Channel, “Despite the couple’s domestic turmoil, they had three children. Meanwhile, Thomas published several highly acclaimed books, including Deaths and Entrances in 1946 and Collected Poems in 1953. His powerful style, combining compassion and violence, made his readings in the United States a success. However, during his tours, he drank recklessly. In 1953, he collapsed after drinking 17 whiskeys at the White Horse Inn on Hudson Street in New York City and died at age 39.”

At age 36, Dylan Thomas had come to New York as part of his first reading tour across the United States.  Three more would follow, the final resulting in his death.  During these tours he spent much time in Greenwich Village, frequenting literary hangouts and watering holes such as the White Horse Inn, Minetta Tavern, San Remo Cafe, and Chumley’s.  At these establishments he got to the know the likes of Joe Gould, Allen Ginsberg, Bob Dylan, and E.E. Cummings.

In 2008, the Welsh Assembly Government created a Dylan Thomas Walking Tour of Greenwich Village.  Written by Peter Thabit Jones and Aeronwy Thomas, daughter of Dylan Thomas, they were so kind as to allow GVSHP to showcase this wonderful self-guided tour on our website.  The tour spotlights the history of the places mentioned above as well as many others such as St. Vincent’s Hospital, where Thomas was taken after collapsing at the White Horse, and the Church of St. Luke’s in the Field, where his memorial service was held.   “The tour is designed to provide you with a strong sense of the real man behind the ‘brassy orator’ with ‘the lovely gift of the gab,’ as well as giving you a feel for Greenwich Village of the 1950s.”  We hope that this inspires you to walk in the footsteps of Dylan Thomas!

Of course Thomas’ impact upon the Village extended well beyond those who knew him during his brief but illustrious time here.  He inspired a generation of artists, poets, and musicians, including a young immigrant from Hibbing, Minnesota who arrived in the Village just a few years after Thomas’ death in 1961.  Born Robert Allen Zimmerman, he soon came to be known by the name he adopted in tribute to his idol — Bob Dylan.