Tomorrow The New School will hold the second part of its symposium, The Feminine Mystique at 50. The symposium marks the fiftieth anniversary of the publication of Betty Friedan’s seminal work.  After authoring The Feminine Mystique, Friedan would go on to become the national voice of second-wave feminism, help found the National Organization for Women (and serve as its first president), and also become a founder of the National Association for the Repeal of Abortion Laws–NARAL.

The school notes that the symposium will feature ‘presentations and inter-generational dialogues about feminism’s past and present, particularly responses to and the continuing relevance of The Feminine Mystique.’ If you can’t make it in person, a live video stream will be available to view it. An accompanying exhibition will be on view until March 5th at the Arnold and Sheila Aronson Galleries at 66 Fifth Avenue.

Like many generations of change-agents before and following her, Friedan lived some of her life in the Village. 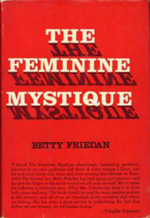 Originally from Peoria, Illinois, Betty Friedan attended Smith College and graduated in 1942.  As the Times notes in her 2006 obituary, she then

‘accepted a fellowship to the University of California, Berkeley, for graduate work in psychology.

At Berkeley, she studied with the renowned psychologist Erik Erikson, among others. She won a second fellowship, even more prestigious than the first, that would allow her to continue for a doctorate. But she was dating a young physicist who felt threatened by her success. He pressured her to turn down the fellowship, and she did, an experience she would later recount frequently in interviews. She also turned down the physicist, returning home to Peoria before moving to Greenwich Village in New York.

There, Ms. Friedan worked as an editor at The Federated Press, a small news service that provided stories to labor newspapers nationwide. In 1946, she took a job as a reporter with U. E. News, the weekly publication of the United Electrical, Radio and Machine Workers of America.

In 1947, she married Carl Friedan, a theater director who later became an advertising executive. They started a family and moved to a rambling Victorian house in suburban Rockland County, N.Y.’

For ten years Friedan lived the suburban family life, but then was inspired to conduct a survey for the fifteenth reunion of her Smith classmates in 1957 about the lives of college-educated women.  This prompted her to conduct more interviews and surveys, which eventually became the basis for The Feminine Mystique.

The book helped spark a national conversation about the most basic aspects of the lives and futures of women in the United States. It paints a gnawing portrait of middle-class women’s lives in the mid-twentieth century, crystallized in the first paragraphs of the work:

The problem lay buried, unspoken, for many years in the minds of American women…Each suburban wife struggled with it alone. As she made the beds, shopped for groceries, matched slipcover material, ate peanut butter sandwiches with her children, chauffeured Cub Scouts and Brownies, lay beside her husband at night—she was afraid to ask even of herself the silent question—“Is this all?”