Do you recognize this location? The building partially visible at left is the only part of this scene that has survived nearly 120 years after the photo was taken in 1895. The Germania Theatre (center) was demolished a few years later, as was every other building on that block. The horse-drawn carts have long been replaced with delivery trucks and the Belgian block streets and the 8th Street trolley rails have since been paved over with asphalt.

What about the Google Streetview photo of the same exact location below? It probably looks a lot more familiar. 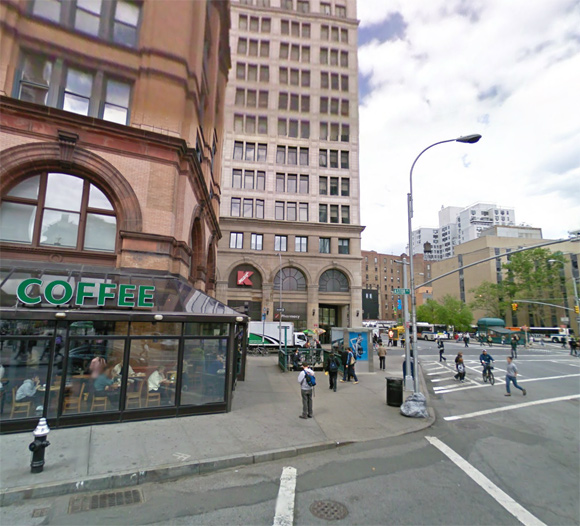 The Germania Theatre pictured in the opening photo actually began life as the Church of St. Ann’s, which makes sense given the ecclesiastical design of the building. It was built at some point in the mid-19th century and later became a factory before it was ultimately converted to a theater. You can find out more about the interesting history of this building on the “Theatre Talks” blog.

The Museum of the City of New York has a great photo of the stage hands who once worked at the Germania:

According to the museum’s site, the stage hands are standing on the stage of the theatre with painted scenery of a tenement box set. This would have particularly resonated with the predominantly German audiences who lived in the tenements of nearby Kleindeutschland. You can learn more about German life and tenement housing in the designation report for the recently designated East Village/Lower East Side Historic District on our Resources page. You can see more of GVSHP’s advocacy work in this area on our East Village page.

The Germania opened in September 1894, though the building had been used as a theatre previously. It did not survive long after, however, as it closed in 1903 to make way for the construction of the Wanamaker Building (see this Off the Grid post).

Here you can see what the block looked like before the Wanamaker Building was built, which now occupies the full city block and might be familiar to many as the location for K-Mart at the ground floor. The map, published in 1899, shows a dense block of mostly four-story pre-law tenements. (Note: The Wanamaker Building shown in this map on block 555 was an earlier building located one block north; it has since been replaced by a high-rise apartment building).

More “Then & Now” posts showing our neighborhood’s history can be found on Off the Grid. If you’re interested in learning more about this area, you can see more in the designation reports for historic districts in NoHo, which can be accessed on our Resources page. Individual NoHo landmarks can be found here.