GVSHP has gotten many inquiries about exactly what the City Council vote last week on the Hudson Square rezoning, and the announcements regarding the proposed South Village Historic District, means for our neighborhood.

To help answer those, we have put together a “Frequently Asked Questions” about the Hudson Square rezoning deal below which we hope will help you better understand this very complex agreement and the profound impact it will have upon our neighborhoods.

What does the deal between the City Council and the City mean in terms of landmarking the undesignated portion of the proposed South Village Historic District north of Houston Street? 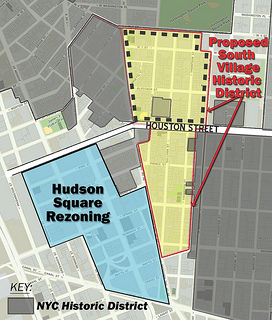 According to Speaker Quinn, the Landmarks Preservation Commission has committed “to calendar and vote on the next remaining section of the South Village Historic District (Zone 2, the area north of Houston Street) … by the end of the year.”  We say “according to Speaker Quinn” because while normally such a commitment by the City is made in writing, the Speaker’s office has not up to this point provided the press or the public with any written document from the City or the Landmarks Preservation Commission (LPC) about this commitment.  However, because Speaker Quinn has been very public in asserting that this commitment has been made (read her statements HERE), this means that she is now responsible for ensuring that it is kept.

Assuming this commitment is kept, does this mean the entire proposed South Village Historic District  north of Houston Street will be designated? 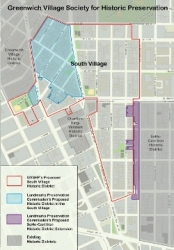 Not necessarily.  The LPC looks at proposed historic districts the public presents to them, and then ultimately decides how much of it to landmark.  For instance, when the LPC considered the first third of our proposed South Village Historic District, in the end they voted to designate about 80% of it.

In Gansevoort Market, they designated about 70% of what we proposed.  There is no rule of thumb; the LPC sets the boundaries.  In theory they could add more buildings to the district than we have proposed, but that almost never happens.

What happens between now and when the landmarking does take place?

The rezoning, and the increased development pressure it will bring, will take effect as soon as the full City Council votes later this month.  However, the commitment on landmark designation is only to vote before the end of the year, so there will likely be nine more months of no landmark protections as the already intense development pressure on these areas only increases. 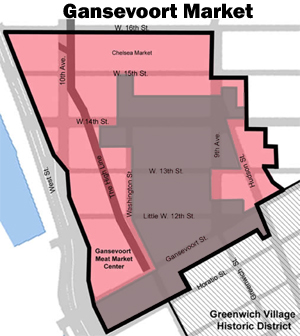 There are many steps that will be taken before the landmark designation is voted upon and takes effect.  First, the LPC will send letters to every owner in the district they are contemplating, letting them know they are considering landmarking their property.  Then they hold an “owner’s meeting,” which is also open to the public, where the possible landmarking and possible boundaries are discussed.  Then they vote to “calendar” the district, which means it is officially under consideration for landmark designation.  Then the LPC holds a public hearing.  Finally, they hold a vote.  Once the vote takes place, if it is approved, the landmarking takes immediate effect.

It is for this reason that GVSHP called for the landmark designation to happen before the rezoning takes effect, and had begun that effort nearly two years ago.  The deal between the Council and the City does not, however, do that.

What does this deal mean for the area south of Houston Street?

Not much, unfortunately.  Again according to Speaker Quinn, the LPC has committed to “complete a survey of the final section (Zone 3, the area south of Houston Street) by the end of the year.”  This means they will examine the area before the end of the year to help them decide whether or not they think it is worth undertaking the process described above to landmark all or part of this area.  It does not mean that they will necessarily take any action after the end of the year regardless of what they find, especially since a new Mayor will take office January 1, and will likely appoint a new LPC Chair and shape new priorities for the LPC. 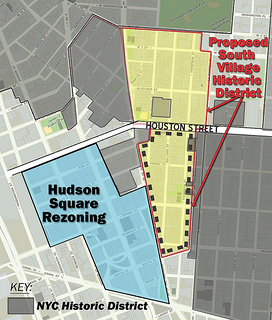 What can be done to protect the area south of Houston Street, given that the deal with the City Council does not protect it?

GVSHP will be supplying the LPC with volumes of research and documentation about the buildings in this area to demonstrate that they are historically significant and worthy of landmark protections (see our letter to the LPC HERE).  We will also continue to lobby for landmark protections for this area as soon as possible, and will continue to monitor for any signs of demolition or inappropriate development plans in the area.  We are in the process of seeking to nominate this area, along with the rest of the South Village, for the State and National Registers of Historic Places, as this provides financial incentives for preservation.  We will also be working with local stakeholders to pursue zoning protections for this and the rest of the South Village, to prevent out-of-scale new development and to encourage preservation of existing, appropriately-scaled buildings.

Just because we did not get a commitment from the City to landmark this area, that does not mean that we have given up on getting it landmarked and protected from inappropriate development.  If anything, it means that our advocacy, and our focus on this area, will increase.

Landmarking aside, what did the City Council do in terms of the Hudson Square rezoning itself, and the concerns expressed about the height and bulk of new buildings which it would allow?

Nothing.  Well, nothing good that is — they actually increased the allowable height of buildings on side streets from what was previously proposed and from what Trinity Realty, the applicant, requested.  The Council increased the allowable height of new buildings on some side-street sites from 185 feet to 210 or 230 feet; however, that additional height can only be used if the new residential development includes 20% affordable housing.

On major avenues, the Council kept the allowable height of new buildings at 290 feet (the City Planning Commission had lowered it from 320 feet — GVSHP had called for 210 feet), even though by far the majority of buildings in Hudson Square, especially the handsome old loft buildings which define this area, are no more than 200 feet tall.  The City Council also kept the maximum allowable height limit of 430 feet for one enormous planned development at Duarte Square at the southern end of Hudson Square — roughly the height of the Trump SoHo.

As for the allowable bulk/density of new development, the City Council made no changes at all, keeping the maximum base floor area ratio (FAR) at 12 — the same density zoned for much of Midtown (GVSHP had urged a 25% reduction to 9).

What else does the new Hudson Square rezoning do?

There are however some upsides to the rezoning.  It does create some new incentives for preserving the larger old loft buildings in Hudson Square, although due to their size, most of these buildings were unlikely to ever face the threat of demolition anyway.  The rezoning does also make hotel development in the area (which was beginning to proliferate) much harder and less desirable.  Also, while we (and many others) felt strongly that the height limits should be lower than what the City Council approved, currently there are no height limits whatsoever in Hudson Square.  Finally, the new zoning will require “streetwall” buildings rather than towers set back behind plazas, which is out of character for the area and is what we have seen with much of the recent development in Hudson Square.

Technically, no; but practically, yes.

The City Council’s Zoning Subcommittee and Land Use Committee have now voted to adopt this deal which Speaker Quinn brokered.  It still needs to be voted upon by the full Council, which will happen later this month.  But with Speaker Quinn’s support and the Land Use Committee (which consists of nearly half the Council’s members) having already voted for the plan, the full Council vote is in many ways a formality which is expected to mirror the committee’s vote.