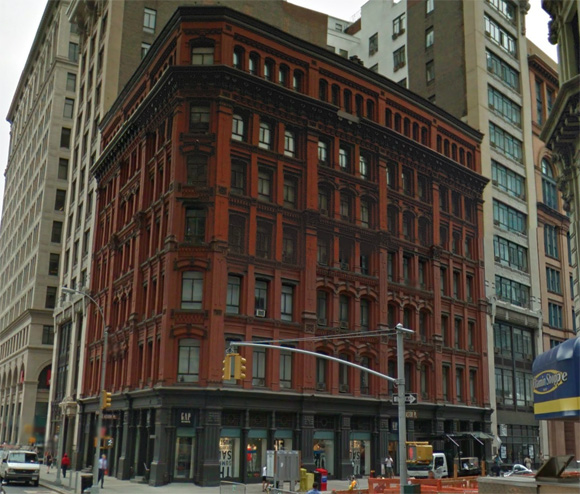 On the corner of Broadway and Astor Place stands one of my favorite things: the beautiful red brick and terra cotta building at 1 Astor Place.  Its bold color lends a powerful presence along the busy thoroughfare of Broadway, even though it’s nowhere near as tall as the buildings along this stretch. Its chamfered corner and thick piers emphasize the verticality of the building, design elements so typical of structures in NoHo. Did you notice that the Astor Place facade curves ever so slightly to mirror the contour of the street?

Every time I passed it I wondered what its history was. Luckily, GVSHP has the designation reports for every historic district and individual landmark in our neighborhoods available on its Resources page, so I decided to look through the one for the NoHo Historic District to find out more about 1 Astor Place (listed as 746-750 Broadway in the report, if you’re curious!). 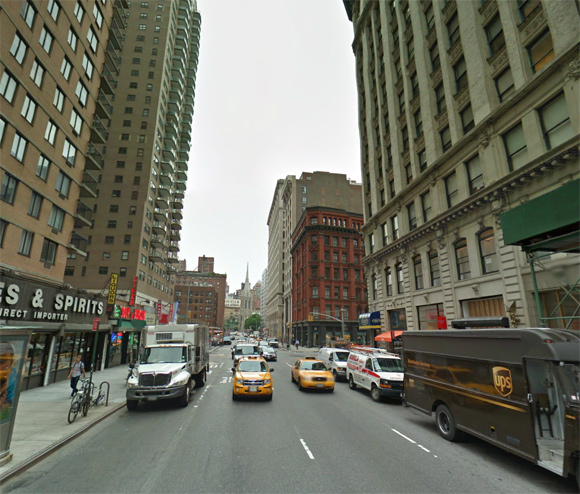 This photo clearly shows how prominent the building is despite its relatively small stature. The red brick and terra cotta (one of my absolute favorite cladding choices) really stands out against the more neutral colors of neighboring buildings on Broadway. Speaking of which, the designation report revealed something very interesting about this building – its original owner was Orlando B. Potter when it was built in 1881-83 to the designs of Starkweather & Gibbs. The name Potter rang a bell; could this be the same Potter that commissioned the equally striking red brick and terra cotta Potter Building near City Hall?

In fact, it was. Not only that, but 1 Astor and the Potter Building were both constructed around the same time and designed by the same architecture firm. Potter, a well-known political figure at the time, owned a lot of land in Manhattan as well. In the NoHo Historic District alone, he was responsible for practically the whole stretch of buildings on Astor Place between Broadway and Lafayette Street with the additions of 444 Lafayette Street and 4-8 Astor Place. He was also the founder of the New York Architectural Terra Cotta Company in 1886, three years after the completion of 1 Astor.

Digging a little further into the report, I discovered that 1 Astor Place originally served as a hotel and boarding house with ground floor stores. Its cast iron storefront is still intact to this day. Reflecting the changing character of the neighborhood from residential to commercial/industrial in the waning years of the 19th century, the building soon  became loft space for manufacturing.

Yesterday, GVSHP featured incredible illustrations of buildings along Broadway. Above you can see the east side of Broadway between the “Old London” Building and 8th Street, with 1 Astor Place visible at left. Zooming in, we can get a sense of what used to occupy the building at the turn of the last century (the illustrations date to 1899) — men’s clothiers Fechheimer, Fishel & Company and Joseph Fowler Shirt and Collar Company, the latter of which had its factory in Glen Falls, New York.

Before clothing manufacturers clustered in the area known today as the Garment District, they actually had a strong presence in this part of NoHo (learn more about this on the Skyscraper Museum website). The Fechheimer, Fishel & Co. band sign sent me searching for more information about this wholesale clothing store, noted in the illustration as “Makers of Fashionable Clothing.”

This amusing advertisement, “The Men We Clothe,” found in the Spartanburg Herald newspaper from April 26, 1910 reveals a bit more about the company, which catered to men’s clothing. They really knew how to advertise back in the day: “This store is the natural headquarters for such [well-dressed] men, and if any of you haven’t yet found that out, you are doing yourself an injustice in the matter of clothes that we are sorry for.”

The store’s location in New York and South Carolina, as well as other states, also illustrates the changing nature of how people bought clothing: from custom-made garments made in local shops to cheaper ready-to-wear fashions sold in department stores available around the country.

Another advertisement for the company, this time appearing in a 1903 Pittsburgh newspaper, shows the fashions that were likely sold around the time the 1899 illustration was drawn. Single and double breasted coats – not to mention Bowler hats – were the order of the day for the well-dressed man.

It is not clear how long the clothing store occupied 1 Astor Place (748 Broadway in the illustration), but it appears that by 1912 they filed for bankruptcy. In the 1980s, the building was converted to apartments. Given the building’s history, it’s fitting that a clothing store – the GAP – can now be found on the ground floor.