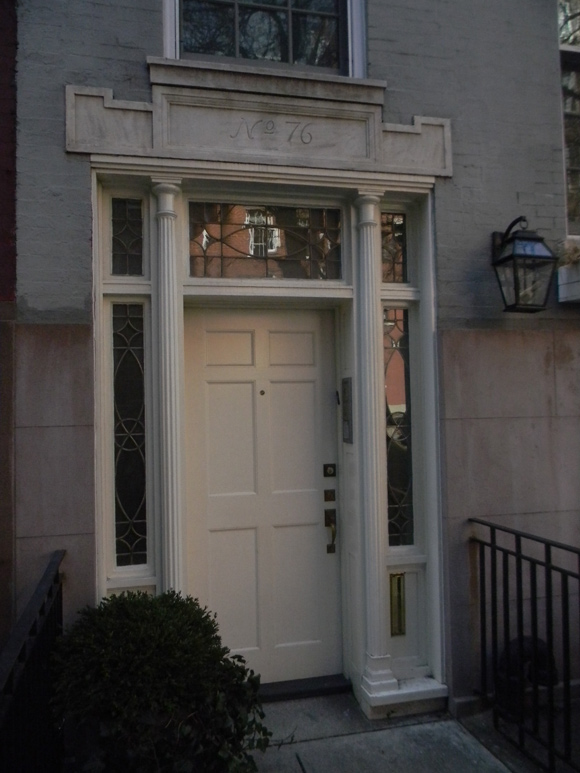 In just a week and a half, GVSHP will hold our 15th Annual Benefit House Tour. There’s still time to buy tickets to see six beautiful private homes in the Village on Sunday, May 5th.  The benefit is our biggest annual fundraiser, and the proceeds help us provide free educational events throughout the year as well as advocate for our historic neighborhoods.

Each of the homes on our tour is unique and surprising in their own ways.  To illustrate some of the delightful and unexpected features you’ll find in these houses, we thought we’d highlight a rather unusual doorway on one of them. One of the first homes on this year’s tour features a beautiful ground floor entryway, which is actually an early 20th century alteration to the house. Built in 1853, like most row houses, this house originally had a stoop that led to a raised, parlor floor entrance.

Stoops on many houses like this one were removed in favor of ground floor entrances when they were divided into apartments in the late 19th and early 20th century.  In most cases, a simple, non-descript doorway was created in the former basement, and the removal of the original doorway was generally considered a loss for the building.  However, at this building, extra care was taken in creating something that truly set the new ground-level entryway apart.

The Greenwich Village Historic District Designation Report describes the paneled lintel above the new door (and windows) as having “unusual upward ‘ears,’ a Twentieth Century version of the Federal style.” In addition to this interesting feature, the doorway is distinguished by a lead-camed transom and sidelights as well as slim fluted Doric half columns.

Unusually, although this entrance isn’t original to the building, it was deemed a significant historic alteration by the Landmarks Preservation Commission. In recent years, many townhouses have been converted back to single-family homes, and it’s common for homeowners to recreate the stoops and original doorways that had been removed earlier. In the case of this home, however, the altered entry was deemed so significant in its own right for its unique and stately design, the homeowners were asked to retain it.

This lovely door is only the first of many delights that you’ll find at this home and the other homes on our tour.  We hope you’ll join us on May 5th to find out how the homeowners cleverly use this ground floor entrance in the unusual interior design of their gorgeous home.  Tour-goers will also receive a program that includes interesting facts about each building’s history and the Villagers who call them home.

You can find out more and purchase tickets HERE.