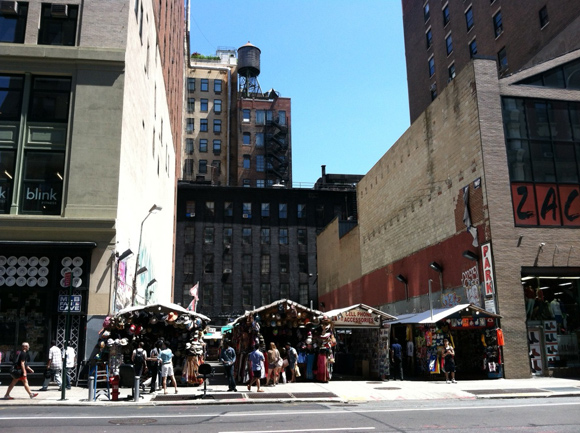 Lately we’ve been receiving emails asking about what’s happening at 688 Broadway in NoHo, which is located on the east side of the street between East 4th and Great Jones Streets. The site is currently an outdoor market, but its vendors don’t have long before the market will close. What will go there in its place?

If you monitor our Landmarks Applications Webpage, you’ll know that the Landmarks Preservation Commission approved an application for a new building at this location last October after a public hearing where the public could weigh in on the design (GVSHP had asked for some changes). The LPC has jurisdiction over this site because it is located within the NoHo Historic District designated in 1999. The above photo was taken yesterday, so clearly the construction work hasn’t begun yet. Let’s take a look at what will be built here:

The architecture firm of BKSK is the designer behind the new 12-story building, which will include a set-back penthouse. Once completed, the upper floors will be residential and the ground floor will be commercial space (a private entrance around the corner by way of Shinbone Alley is also part of the design).

A terra cotta screen wall projecting in front of windows at the Broadway facade is similar to another BKSK design: 25 Bond Street in the NoHo Historic District Extension:

The lot at 688 Broadway has been a parking lot since 1960 when two loft buildings were demolished. While it’s not clear when construction will start it will likely happen sometime within the next year. So if you have a favorite vendor at this outdoor market, it would be better to head on over there sooner rather than later!

If you’re curious to see more of the new building at 688 Broadway, you can access the plans on our Landmarks Application Webpage.