Want to learn more about Bella Abzug and other feminist and civil rights pioneers like her?  Visit GVSHP’s Civil Rights and Social Justice Map.

Bella Savitzky Abzug was born in the Bronx to Jewish immigrants from Russia on July 24, 1920.  First elected on November 3, 1970, she would become a U.S. congresswoman, leading voice for women’s rights, and candidate for New York City mayor and US senator. For many years, she was also a Greenwich Village resident. 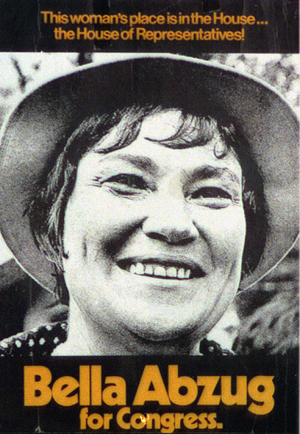 The Times noted that “she opposed the Vietnam War, championed what was then called women’s liberation and was one of the first to call for the impeachment of President Richard M. Nixon. Long after it ceased to be fashionable, she called her politics radical…Bella Abzug was a founding feminist, and an enduring one. In the movement’s giddy, sloganeering early days, Ms. Abzug was, like Betty Friedan and Gloria Steinem, an icon, the hat bobbing before the cameras at marches and rallies. ”

Years before she would become a galvanizing politician, she graduated from Hunter College and Columbia University Law School, and was admitted to the New York Bar in 1947. She started practicing in New York City at the firm of Pressman, Witt & Cammer, focusing on organized labor issues. By the 1960’s Abzug became more involved with the anti-war movement — from nuclear weapons to Vietnam — all the while becoming immersed in the world of politics.

She and her husband moved to a townhouse at 37 Bank Street between Greenwich Avenue and West 4th Street at the end of the 1960’s. In 1970 Abzug ran for congress and on November 3rd won, having defeated the fourteen-year incumbent Democrat Leonard Farbstein in the 19th Congressional District, which then ran along the West Side from lower Manhattan to the West 80s. Her campaign office was located next to the legendary Lion’s Head bar on Christopher Street. You can read more about Abzug’s trailblazing and tumultuous political career here. 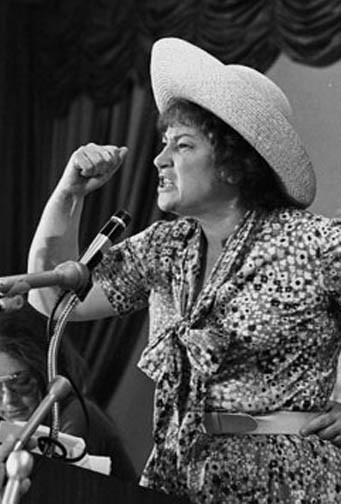 Aside from her liberal causes, Abzug was also known for her ever-present headwear, her penchant for which was sparked during her time working as a lawyer. She noted, “When I was a young lawyer, I would go to people’s offices and they would always say: ‘Sit here. We’ll wait for the lawyer.’ Working women wore hats. It was the only way they would take you seriously…After a while, I started liking them. When I got to Congress, they made a big thing of it. So I was watching. Did they want me to wear it or not? They didn’t want me to wear it, so I did.”

Want to learn more about Bella Abzug and other feminist and civil rights pioneers like her? Visit GVSHP’s Civil Rights and Social Justice Map.

2 responses to “Hats Off to Bella Abzug”