It’s always fun to look at then and now photos of buildings and streetscapes we’ve long come to admire here on Off the Grid.

Today, just ahead of the Labor Day weekend, we wanted to check in on the Hebrew Actors’ Union building at 31 East 7th Street in the East Village. With its stark Neo-Classical facade, the small but mighty building stands out on a block full of brick.

From 1923 to 2002, the building housed the Hebrew Actors’ Union (HAU). Although they officially disbanded 11 years ago, the HAU still owns the building.

The 1968 photo at left was taken in the union’s 45th year in this building. Officially formed in 1888, the union, as its name suggests, served Jewish actors.

While primarily consisting of members from New York City, and more specifically from the nearby Jewish theater district on Second Avenue, the union also served Jewish actors across the country.

As the union’s home for nearly 80 years, the HAU is an integral part of East Village history. Let’s take a closer look at this cultural gem.

Although we’re looking at a 1923 facade, some of the bones of this building are even older. As tax records we have on file indicate, the original rowhouse that stood here likely dated to about 1848. It almost certainly had a stoop, too. Converting from single- to multi-family later in the decade (we’re guessing it became a tenementized rowhouse as the area’s immigrant population grew and grew), the building received its makeover just as the Hebrew Actors’ Union took over.

Architect Victor Mayper was commissioned to give the building a 20th century update. His Neo-Classical design put a fresh face on a brick-heavy neighborhood and was likely a bright spot for many actors who passed through its doors. 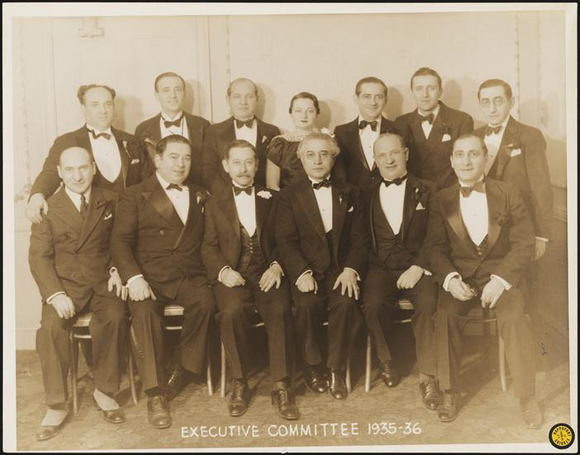 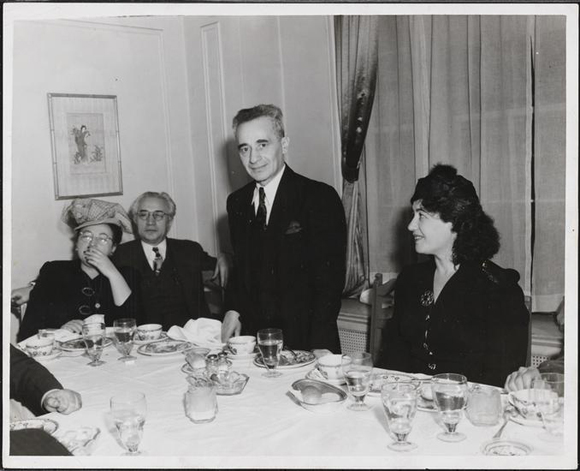 And just to help visualize the life and events that went on here, these photos show the 1935-36 executive committee of the HAU (top) and noted actor Jacob Mestel and guests at a luncheon for the release of his book, “Undzer Teater” in 1943 (bottom). Both photos are courtesy of the MCNY.

We’re not 100% sure that these photos were taken in the building itself, but we do appreciate how classy everyone looks in their tuxedos, suits, and fancy hats!

Overall, the building has held up well over the years, don’t you think? The LPC had actually proposed it for individual landmark designation and held a hearing in 2009 at which GVSHP testified in support. However, it ultimately became part of the East Village/Lower East Side Historic District almost a year ago now. Here’s what the designation report has to say about the building’s notable history:

The Hebrew Actors’ Union (HAU) was founded in 1888, making it the first theatrical union founded in the United States. With a peak membership of 400 members, the HAU was the organizing force behind some dozen Yiddish theaters in New York and in other major American cities. In this way, the building at 31 East 7th Street, home to the HAU for nearly eight decades, is an enduring reminder of the Yiddish theater, one of the most important cultural institutions of New York City’s Jewish community in the early 20th century.

Love comparing the “thens” to the “nows” as much as we do? Check out these past posts in our “Then & Now” series.