On September 9, 2003, the Gansevoort Market Historic District was officially designated by the New York City Landmarks Preservation Commission.  The designation not only culminated a three-year effort to protect the increasingly endangered Meatpacking District from the very real prospect of mass demolitions and oversized new development (such as the Hotel Gansevoort, which preceded the landmark designation), but was the end of a thirty-four year logjam during which there had been no new historic district protections added in Greenwich Village, and the beginning of a decade of landmarking successes by GVSHP which ultimately included landmark designation of over a thousand buildings, and community friendly contextual rezonings or downzonings for nearly one hundred blocks.

Fortunately, the successful Meatpacking District/Gansevoort Market landmarking effort was just the beginning of a long run of landmarking and zoning successes GVSHP has had in our neighborhoods, after a rather protracted dry spell — the last new historic district in Greenwich Village before the Gansevoort Market Historic District had been designated in 1969 (though local activists had been able to get a small but important two-building expansion of the East Village’s St. Mark’s Historic District in 1984, and the first stage of the NoHo Historic District designated in 1999).

GVSHP was also able to help secure four different community-friendly contextual rezonings and downzonings in our neighborhood, including the 2005 Far West Village rezoning (the first downzoning in Manhattan in a generation), the 2008 East Village/Lower East Side rezoning (the largest rezoning in Manhattan since 1961), the 2010 3rd and 4th Avenue Corridor Rezonings, which will prevent more high-rise NYU dorms from ever being built in that area, and the 2010 Washington and Greenwich Street rezoning, which blocked two out-of-scale projects including a planned 100 ft. tall hotel.

In all, since 2003, GVSHP has helped secure landmark designation for 1,250 buildings, and contextual rezonings or downzonings of nearly one hundred blocks. Of course there have been many losses and other challenges as well, but one might say that starting with the Gansevoort Market Historic District, we have been on a very good roll.

Click here or on map below for more details and explanations about successful landmarking and zoning protection efforts in our neighborhoods. 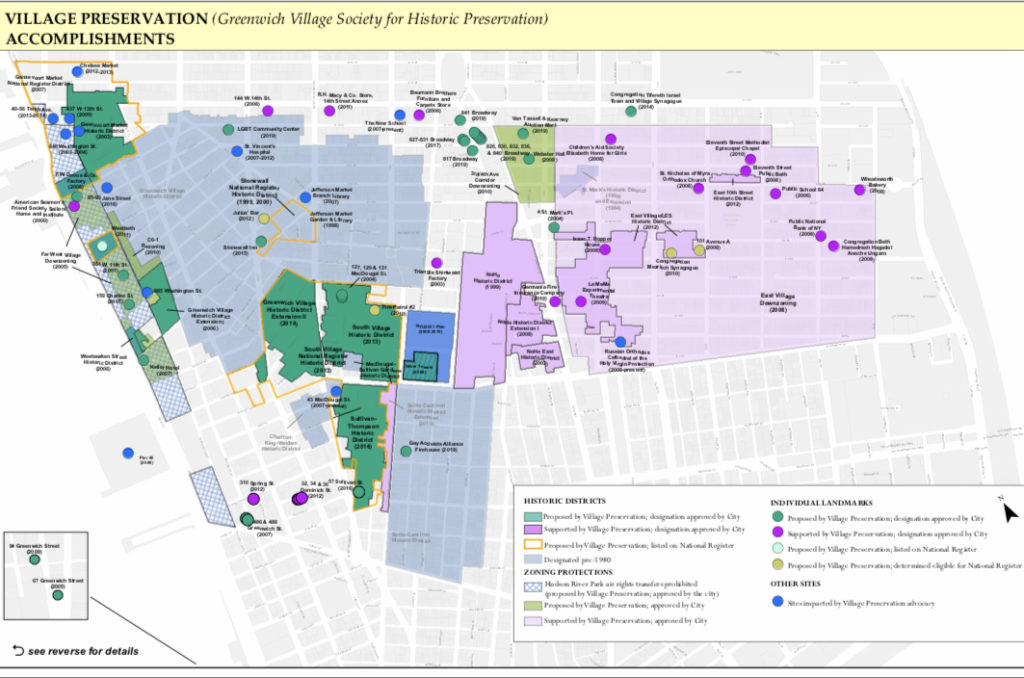