Breakfast at Tiffany’s, one of the defining movies of the 1960’s, and defining movies about New York, was released on October 5, 1961.  Long skinny black dresses were never the same again.

It’s often understandably assumed that Holly Golightly and Paul Varjack lived in the Village, as the cast of unconventional characters which populated their charming but modest converted rowhouse would seem to naturally imply.  In fact, the house used in the film was located at 169 East 71st Street on the Upper East Side, which would jibe with the strolls Holly, Paul, and Doc Golightly would take to Central Park and, of course, to Tiffany’s.

But lest you think your Village-recognition sensibilities are totally off, rest assured, there is plenty of the Village in this iconic film — from the writer, to the director, to the star, and — possibly — to the uncredited inspiration for the film.

Audrey Hepburn’s Holly Golightly may have only seemed like the ultimate Downtowner, but Hepburn herself was certainly no stranger to playing a Villager on film.  In one of her earliest and most acclaimed roles, in 1957’s Funny Face, she played the quintessential Greenwich Village bookworm, discovered in a dusty old bookshop and transformed into the rage of the runways of Paris.

In 1967’s Wait Until Dark, she played a blind woman terrorized by violent criminals in her basement apartment at 4 St. Luke’s Place.  And according to “Audrey Hepburn: A Biography,” the actress moved to the Village in the 1950’s.

Breakfast at Tiffany’s director Blake Edwards may not have lived in the Village (like Holly, he and wife Julie Andrews lived on the Upper East Side for many years), but one of his first big breaks in film was co-writing 1955’s “My Sister Eileen,” the iconic tale of two sisters from Ohio trying to make it in the big city and ending up in a basement apartment in Greenwich Village, based upon the autobiographical short stories by Ruth McKenney published in the New Yorker.  And while Truman Capote, the writer of the original novella “Breakfast at Tiffany’s” lived in Brooklyn Heights, he was certainly a frequent fixture at many Village gathering spots in the 1950’s and 1960’s.

And it may have been from this time spent in the Village that Capote got his alleged inspiration for the Holly Golightly character — a Greenwich Village bookstore owner and author named Bonnie Golightly.

According to Time Magazine, Capote was sued by Bonnie Golightly after his Breakfast at Tiffany’s story appeared in Esquire Magazine:  “Bonnie Golightly, 39, is a practicing novelist (The Wild One) and ex-Greenwich Village bookstore owner. Far from being ‘a figment of Truman Capote’s so-called imagination,’ Bonnie claims, Capote’s colorful heroine was constructed from details about Bonnie gleaned by Capote (‘a creative reporter’) from ‘mutual friends.’  Besides a broad Southern accent acquired from her Tennessee upbringing, Bonnie Golightly points to some other evidence. Like Capote’s Holly, she lived in a brownstone on Manhattan’s fashionable East Side, with a bar around the corner on Lexington. Like Holly, she is an avid amateur folk singer with many theatrical and offbeat friends. Like Holly, Bonnie says: ‘I just love cats. The cat thing corresponds, and all the hair-washing and a lot of things hither and yon.”

The real-life Golightly was quite a character, one who had her own brushes with ‘creative writing’.  Golightly was a prolific pulp-fiction writer, whose lurid titles leave somewhat less to the imagination than the fictional Golightly did. 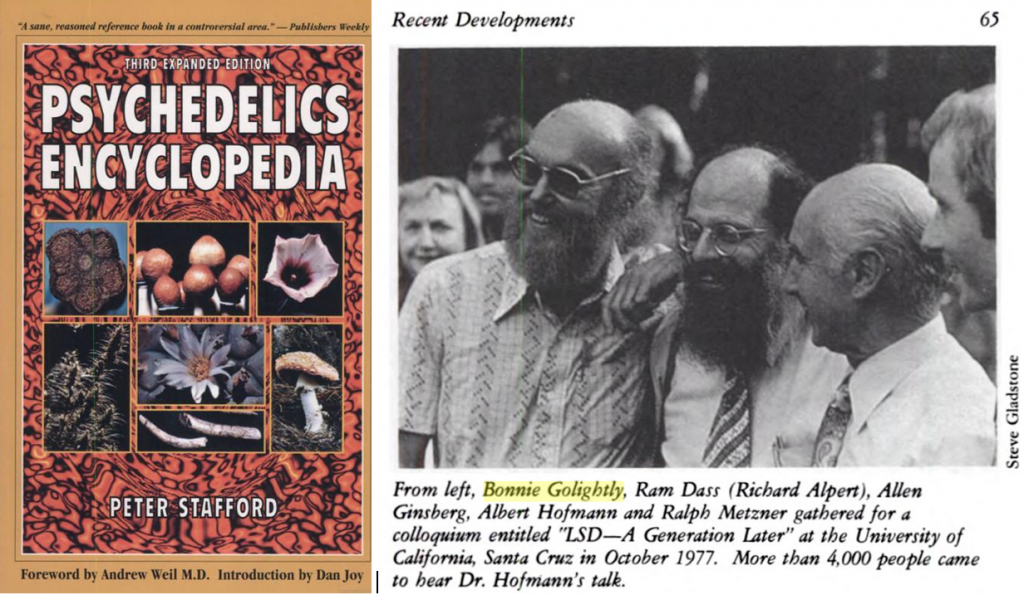 In later years, the real-life Golightly threw herself into the counterculture, writing books about the paranormal and LSD, and even appearing in the “Psychedelics Encyclopedia” with Allen Ginsberg.  A lifelong smoker, she died in 1998 of lung cancer.

While there may have been some noteworthy coincidences between the lives of Bonnie and Holly Golightly, Truman Capote nevertheless claimed there was no connection whatsoever.  He’s even quoted as lashing back: “I have never met nor seen this lady…It’s ridiculous for her to claim she is my Holly. I understand she’s a large girl nearly forty years old. Why, it’s sort of like Joan Crawford saying she’s Lolita.”

Apparently the courts agreed, and Bonnie Golightly lost her lawsuit.  Her claim to have been the inspiration behind Holly Golightly, however, may outlive ‘The Wife Swappers” and “The Intimate Ones,” or any of her other titles.

3 responses to “Breakfast at Tiffany’s and the Village”