This is the first in the Looking Up series of posts, which will explore the unique architectural and historical stories that can be discovered when we raise our gaze above the sidewalk, the storefront, and the second floor.

Located at 1-5 Bond Street near Broadway, the Robbins & Appleton Building is a prime example of the remarkable cast iron architecture that one can find throughout NoHo and up and down Broadway. The building is both an individual New York City landmark and included within the city’s NoHo Historic District. At street level, this building looks like many other cast-iron commercial buildings in the area, but a glance upwards reveals a striking mansard roof. Perched at the very top of the building below the central pediment is a gold clock that reflects some of the building’s history.

It was in 1871 that merchants and manufacturers Henry A. Robbins and Daniel Fuller Appleton hired architect Stephen Decatur Hatch to design a new building to house their American Waltham Watch Company, which was a noted manufacturer of watches and watch cases. Located on Bond Street, this new commercial building reflected the transformation of the street from a fashionable residential enclave during the early part of the nineteenth century to a commercial and manufacturing center by the mid-to-late 1800s.

Hatch’s 1871 building had a short life, as on the night of March 6, 1877 a massive fire destroyed the structure. Robbins and Appleton again sought out Hatch to create a replacement, a grand Second Empire style factory building which was constructed between 1879 and 1880, opening on April 30, 1880.

As the city’s Landmarks Preservation Commission notes, “the present building, erected two years after the fire, is a stylistic variation on the [commercial] palace theme. Although designed by the same architect in the same style with the same façade material for the same clients as the 1871 building and retaining such features as the mansard roof, the function of the new building was different. The new building was to serve as a factory with the exception of some floor space which was leased to D. Appleton & Co., the notable book publishing firm. Lush and intricate architectural embellishment was unnecessary on a utilitarian structure such as a factory. With the exception of the ground floor, roof, and shallow end pavilions which give the building its Second Empire character—unusual for this date and probably retained at the insistence of the client—the façade consists of a single window bay unit reproduced twelve times across each of the upper four floors in disciplined regularity. The bay unit is a deeply recessed one-over-one double-hung window flanked by smooth columns with simple necking and stylized capitals carrying a shouldered arch. The strength and beauty of the building lie in the strong horizontals of the cornices above each floor and the three-dimensional quality created by the deeply recessed windows.”

The American Waltham Watch company left the space by the turn of the twentieth century, replaced by a variety of small-scale manufacturing and commercial firms. Converted to residential use in the late 1980s, the building stands as a majestic anchor to the architecturally eclectic Bond Street. 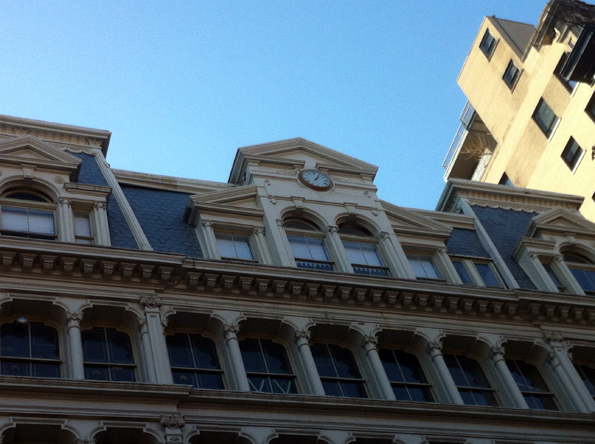 One response to “Looking Up: The Beginning of Bond Street”