This post is the first of a four-part series called Everyday Lives, Ordinary People: A History of East Village Immigrants, a collaboration between GVSHP and the students in NYU’s Fall 2013 Intro to Public History course. Each group of students was tasked with researching the cultural history of everyday people in the East Village between 1850 and 1950. In conjunction with the public program held on Wednesday, December 11th, each group was also tasked with sharing their discoveries with us on Off the Grid.

The following post was written by Barbara Leung, Shannon Morrow, & Will Twersky.

The former Evangelical Lutheran Church of St. Mark’s at 323 East 6th Street is best known in history as being involved with the largest disaster in New York City history until the 9/11 attacks. In 1904 about 1,300 members of St. Mark’s boarded the General Slocum ferryboat to take them to their annual picnic. On the way, the ship caught fire off the coast of the Bronx, and 1,000 people on the ship, mostly women and children, died.

During the mid- to late-nineteenth century, New York City saw a mass influx of German immigrants. By 1855, New York City was home to the third largest German population globally, following Vienna and Berlin. Nicknamed Kleindeutschland (“Little Germany”), the area’s boundaries were defined as between 14th and Division streets, and the East River and the Bowery. 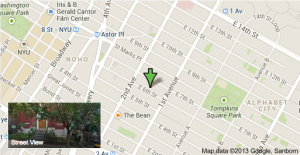 In 1846, the Corporation of the United German Lutheran Church purchased three lots for $6,600. The following year, construction began on what would become the present-day synagogue. A few former members of St. Matthews Church organized the Evangelical Lutheran Church of St. Mark. This new congregation (mostly comprised of skilled laborers and merchants) rented the hall (completed in 1848) from the St. Matthews Church until 1857 when enough funds were secured ($8,000) to purchase the church.

Between 1904 and 1939, the building remained home to the St. Mark’s Church.  By the close of the 1930s, St. Mark’s membership numbered approximately fifty.  At this time, those who remained headed north and combined with the Zion Church on the Upper East Side of Manhattan.  Zion Church was founded at its current location in 1892 in Yorkville where there was an expanding German community. St. Mark’s officially combined with Zion in 1946 after most of the remaining congregants had left the Lower East Side and moved to Yorkville.  The merge can still be seen today, as that church still exists under the name Zion-St. Mark’s Evangelical Lutheran Church.

In 1940, the former St. Mark’s Church became associated with another of New York City’s significant immigrant communities.  The building changed hands and became the Community Synagogue Center, which served Orthodox Jews.  The project was financed by businessman Saul Birns, who was well-known for building Lower East Side apartment houses, and founding member Max Isaacs.  The acquisition of 323 East 6th Street cost $27,000.  During the early years of the synagogue, the Lower East Side was home to the world’s largest Jewish community.

Between 1982 and 1983, the Community Synagogue absorbed the Max D. Raiskin Center, which had previously been known as the East Side Hebrew Institute.  The Institute was a private school at 295 East 8th Street, on Avenue B.  The merging of these two places led the Sixth Street synagogue to change its name to the Community Synagogue Max D. Raiskin Center.

The General Slocum incident sped up an already in-motion process of residents leaving the area to settle elsewhere in the city.  Unlike other disasters like the Titanic, on which people from even the highest classes died, the General Slocum incident affected only a working-class immigrant community, and thus received less attention and remembrance. 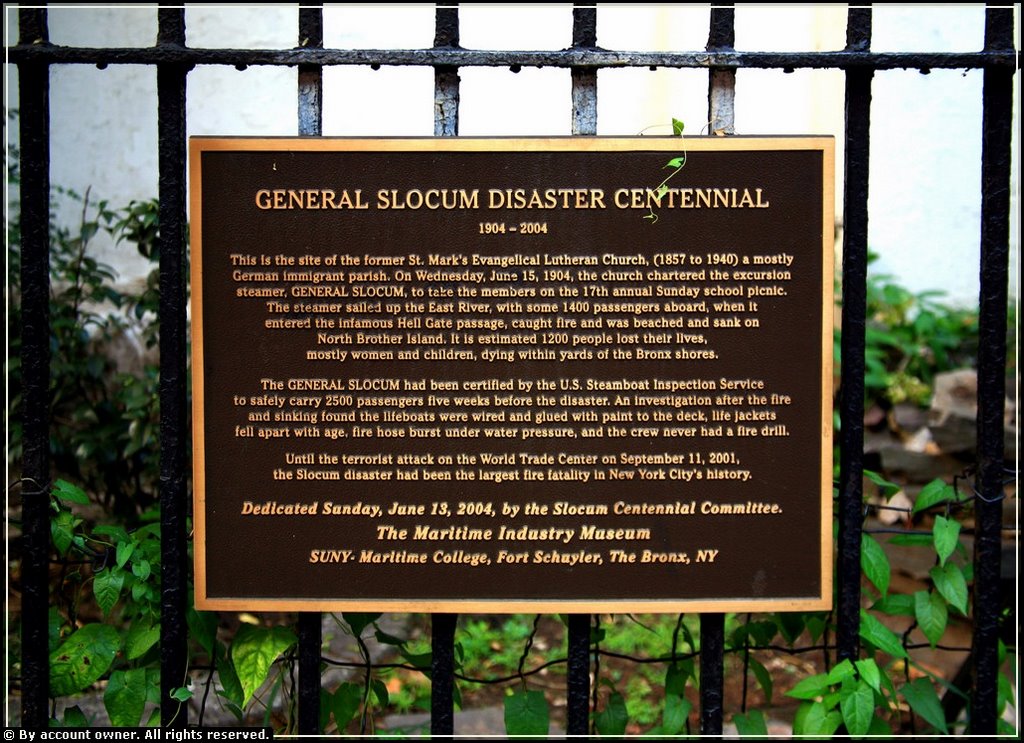 There has been a resurgence of memory about the event in the past ten years, including the placing of a plaque at St. Mark’s to honor the victims in 2004 and a small annual ceremony at the cemetery monument in Queens, but more needs to be done to make up for one hundred years of forgetting rather than remembering.