The East Village has a wealth of restaurants, bars, and landmarks to visit, all offering glimpses into the neighborhood’s historical and cultural past. At times it can seem overwhelming to absorb all the sites, especially if all you have is a chilly afternoon  in  the late winter to do so. With Greenwich Village Stories as your unofficial guidebook,  you can tour the neighborhood as some of its most well-known residents have, viewing this iconic piece of Manhattan through the eyes of contributors to Greenwich Village Stories, often as they saw it for the first time.

Take the 6 train and step out at the Astor Place subway stop  at the intersection of  Lafayette Street and Astor Place and look around. This is the spot where author Jennifer Finney Boylan rode her first subway following her arrival in New York City in the fall of 1980.  Before she wrote She’s Not There or Stuck in the Middle with You, Boylan arrived in New York with a backpack, Neal Cassady’s The First Third, and an Autoharp.

Upon exiting the subway, Boylan and  her friend walked to a nearby bar called the Grassroots Tavern. There her friend laid out a map and explained  each neighborhood and whether it was safe to walk there. The friend’s final offering was a subway token. Boylan took it and  thought, “The city was mine.”

If you’re feeling cold, walk to 9th Street and 2nd Avenue and warm up inside East Village landmark Veselka, which has been serving Ukrainian food since 1954.  In 1978, photographer Dona Ann McAdams first visited Veselka. It was the pea soup that kept McAdams coming back to the 24-hour restaurant during the thirty years she lived nearby. 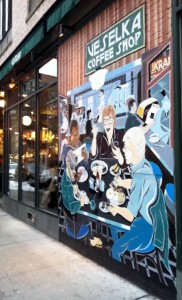 While she worked as the house photographer for PS 122, documenting  all performances held in the theater, she often rewarded herself after a long night of shooting and processing film with a visit to Veselka. Whether it was late at night or early in the morning, McAdams always had “Veselka to look forward to, and a bowl of pea soup.”

Walk the short distance to PS 122 at 150 1st Avenue  to see not only where McAdams worked but also where novelist Brad Kessler, author of  the the memoir Goat Song: A Seasonal Life, A Short History of Herding and the Art of Making Cheese, once shared a top-floor studio. 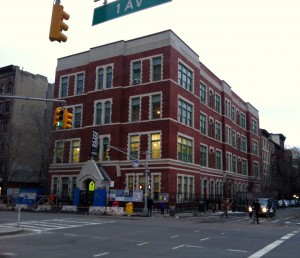 He remembers a pigeon who landed on his roof following a fall hurricane. The pigeon, lost and disoriented, stayed with Kessler for days, cautiously flying circles around PS 122 until one day she did not return. Years later, Kessler still remembers the pink and cream bird and “how she chose the East Village for her sanctuary.”

Finish your East Village walking tour at  Tompkins Square Park, which sits between Avenues A and B and 7th Street and 10th Street. Musician Jesse Malin, who has fronted NYC bands Heart Attack and D Generation, used to visit the park  as a teen when he ventured into the Village, far from his one-bedroom apartment in Queens. He looked for musical inspiration and found the park pasted with flyers for bands like The Stimulators and Bad Brains. Within the East Village, he found bands similar to his own and became part of a new musical movement. 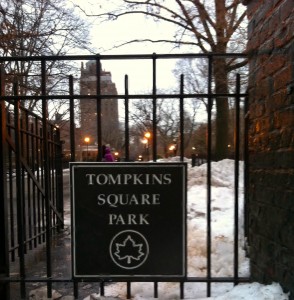 Though Jesse Malin laments the changes the East Village has undergone, he remains optimistic: “The sun still rises over Tompkins Square Park shedding light on a spray-painted wall that reads ‘The Future is Unwritten.’”

With over sixty contributors, Greenwich Village Stories has many more memorable Village locations to share. Stay tuned in the coming weeks for a West Village walking tour featuring Mario Batali, Lenny Kaye, and others as your GVS “tour guides.”