The New York Marble Cemetery and the New York City Marble Cemetery (yes, it’s confusing) both turn 45 tomorrow. Well, they’re actually a lot older than that (over 180 years and counting), but on March 4, 1969 they were designated city landmarks by the Landmarks Preservation Commission.

They can be found one block away from each other in the East Village. Do you know where they are and which one is which? Today, in commemoration of 45 years of city landmark status, let’s take a look at some great old photos of New York Marble Cemetery (and just where it’s located).

Both cemeteries are on blocks between East 2nd and 3rd Streets and on either side of Second Avenue. A helpful way of remembering one from the other is that the New York Marble Cemetery is located at the center of its block and is bordered on every side by tenements and rowhouses. A casual passerby may not even realize it’s there unless he/she happens to notice it through the narrow gated passage off Second Avenue.

On the other hand, the New York City Marble Cemetery faces East 2nd Street and can therefore be seen from the street. It’s still bordered on three sides by buildings, but it’s not as much of a secret as its neighbor one block west.

The first two photos in this post show the New York Marble Cemetery as it looked c. 1910. The photo captions reveal that it was also known as the First Marble Cemetery (this one was created in 1830 as the first non-sectarian burial ground open to the public; its eastern neighbor of 1832 was the second).

As you can see, there’s not much to look at in the way of tombstones or monuments. Instead, 156 underground vaults were created of Tuckahoe marble, from which the cemetery received its name, and marble plaques were installed along the stone walls you see above.

These photos also provide a great view of the rear of the surrounding buildings along Second Avenue. Today, they are included in the East Village/Lower East Side Historic District.

The noted social reformer Jacob Riis provided us with even earlier photos in the summer of 1895. Famous for taking photos of and writing about the deplorable living conditions of the city’s poor around the turn of the 20th century, Riis had proposed turning the cemetery into a children’s playground. According to the timeline on the New York Marble Cemetery’s website, all owners had to give consent. Since not all of them could be found, the idea never moved forward.

It’s interesting to compare the 1895 and c. 1910 photos to see how much the landscape had changed in that roughly fifteen-year time period. In a 1909 source, the cemetery had been largely forgotten and the hope remained that it would become a playground.

Riis also took this photo of the not-so-pleasantly named Dead House. It was eventually demolished in  the mid 1950s. The LPC’s 1969 designation report indicates that this “primitive rough-hewn structure of stone” had been located on the southwestern corner of the cemetery.

The cemetery’s website says it was used for the “temporary storage of remains awaiting burial or shipment” (see 1914 drawing here). 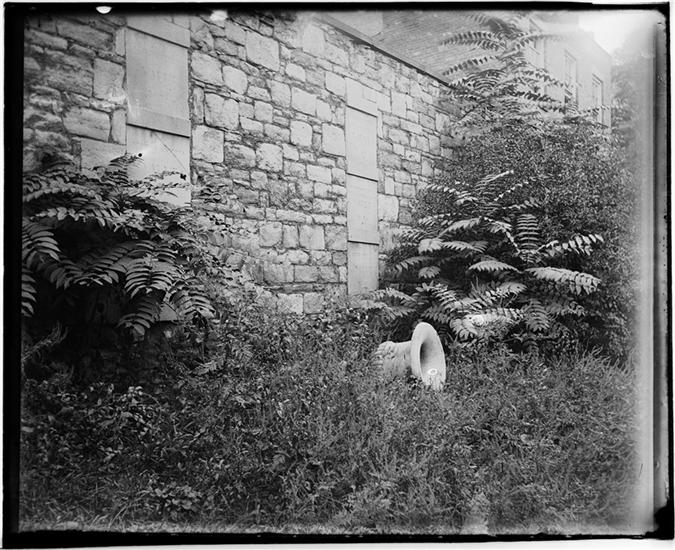