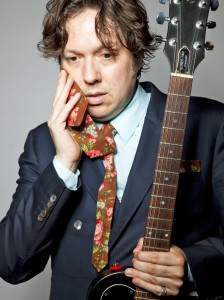 Dave Hill, comedian, writer, and host of radio show The Goddamn Dave Hill Show, has lived in the Village for less than a decade, but he has quickly made it home. Because of his constant touring schedule, he likes to return to the familiarity of this neighborhood, even as it changes around him.

After attending college at Fordham University, returning to his hometown of Cleveland, and later coming back to New York, Dave first lived in Chelsea at the famous Chelsea Hotel. He would often walk down to the Village to visit friends. In 2006, he lucked upon a place his friend was moving out of on the kind of street where movies are filmed, a street that “Bob Dylan actually took the time to write a song about.” Now he lives in an apartment Iggy Pop owned in the eighties–”I didn’t know that before I got it; it’s a bit of a conversation piece,” he explains.

Hill considers himself partial to west of 7th, almost to Washington, and below 14th, his own niche within the neighborhood. He likes the quiet of the West Village. While he thinks the romanticized image of the Village that people hold is gone, he thinks that’s only natural. “People talk about how it has changed so much and it’s not like it was, but nowhere is anymore.” What doesn’t change about the Village are the people. “The greatest resource of New York will always be the people.”

Hill thinks his whole life has been changed by living in New York. “I never planned to be a stand-up comedian or have a radio show.” Living in New York, Dave had the opportunity to meet people, other writers, not because he was trying to but because they were here. “I’m friends with Malcolm Gladwell, not because he’s Malcolm Gladwell, but because he was my friend’s friend Malcolm we had beers with. He was this guy doing this thing; it turns out he was doing alright.” Now he often runs into Gladwell, a fellow GVS contributor, around the neighborhood.

Hill’s first book, the essay collection Tasteful Nudes, came out in 2012. He is currently working on a new book, what he calls a “non-fiction novel,” which he started working on this past December. He wants to move away from the comedic essay genre, so he’s focusing on a new format. In addition to his writing, he is currently working with Comedy Central to develop a pilot based on Tasteful Nudes. “It’s a Wonder Years scenario where it’s me looking back.” When he’s not writing or working on TV projects, he’s often touring, next to Australia and then on three European comedy tours. When he’s back from his tours, he wants to stay put in the Village.

Though the rents have risen and most of the Village artists have moved to Brooklyn, Dave doesn’t lament the inevitable change. “Everyone talks about how it used to be, but in twenty years, we’ll be sitting here talking about how it great it was now.”