This is the latest installment of the Off the Grid series in which we highlight the people, places and events featured in our new book Greenwich Village Stories, available for purchase now. Visit our Facebook page for the latest on book contributors, release events and readings, and contest information. 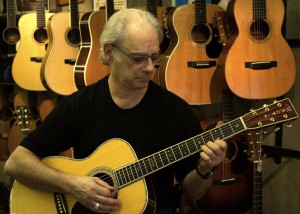 Music first brought Matt Umanov to the Village. Playing, building, and repairing instruments were all intertwined for him. In his youth, he found a mentor in Marc Silber, who owned a guitar shop called Fretted Instruments for a brief time in the sixties next to the Folklore Center. While Matt was in high school in Brooklyn, he often visited the Village and Marc’s store.

Music kept Matt in the Village. After leaving college two months into his freshman year, he worked in guitar factories for a little over a year while simultaneously taking in guitar repairs from the public. At eighteen, he was the guitar whiz kid, fixing guitars for the likes of Eric Clapton. He moved from various workspaces throughout the neighborhood. In 1969, a storefront became available on Bedford Street. Newly married, Matt’s wife suggested they rent the shop–he could fix the guitars and she could sell them. He named the store, fittingly, Matt Umanov Guitars. 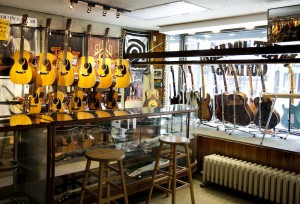 Since the seventies, Matt has not only called the Village his place of work, but his home. In 1977, Matt moved his store to 276 Bleecker Street, now the “small room” of John’s Pizzeria, and in 1982 to its current home at 273 Bleecker, just across the street. There were still bakeries, fish stores, butchers, and other neighborhood stores. Matt laments that now there are only five businesses on his strip of Bleecker that have been here for more than twenty-five years, have someone’s name over the door, and are family owned. “It’s four Italian food places and me, and I’m the young guy at forty years.” He does find some remnants of his beloved neighborhood, from the crooked streets to the cobblestones. “Despite the fact that everything you see on the street is mostly tourists looking at each other, there are little enclaves here. We’re comfortable. We don’t have to leave.”

Matt believes that if we don’t care about preservation, the Village will be “gobbled up in no time.” His own block was included in the historic district only a few years ago. “The historic district used to go right around us.” Matt has watched many beloved restaurants close, but one of his favorite spots that has remained is Washington Square Park, where musicians have been strumming guitars for decades.

As the owner of a well-known and well-respected guitar shop frequented by famous musicians and novices alike, Matt has a wealth of stories to tell about the Village. In Greenwich Village Stories, he shared a memory of Bob Dylan playing guitar in the shop next to a young kid who had no idea with whom he was jamming. Another of Matt’s favorite memories is of Johnny Cash and his wife June, who were customers of the store. They came in one day to buy a guitar and Johnny paid with a credit card. With the older style of credit card machines, sometimes a message popped up on the screen that asked the employee swiping the card to call the credit card company. This happened when Matt swiped Johnny’s card, so he proceeded to call and answer the questions of the unwitting employee on the other end of the phone.

“Is the cardholder present?”

“Does the cardholder have additional ID?”

“May I speak to the cardholder, please?”

The woman on the other end still required that Johnny Cash show Matt his driver’s license.

This anecdote of Johnny Cash is one of Matt’s many Greenwich Village memories. Matt reflects on his forty-four years in the iconic guitar shop: “I’ve got a lot of stories.”