This is the latest installment of the Off the Grid series in which we highlight the people, places and events featured in our new book Greenwich Village Stories, available for purchase now. Visit our Facebook page for the latest on book contributors, release events and readings.

The West Village has many restaurants, bars, and landmarks to visit, all offering glimpses into the Village’s storied past, even as the neighborhood continues to evolve. At times it can seem overwhelming to absorb all the sites, especially as the weather warms and the sidewalks swell with Village natives, NYU students, and tourists. With Greenwich Village Stories as your unofficial guidebook,  you can tour the neighborhood as some of its most well-known residents have, viewing this iconic piece of Manhattan through their eyes. 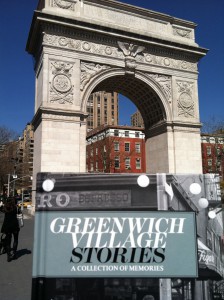 While at the park, think about the many writers, musicians, and artists who have sought solace or inspiration here, from Bob Dylan to Marcel Duchamp. Poet Anne Waldman calls the park “an extension of our lives.” She remembers her childhood spent there: “Pete Seeger lived down the block and I attended his hootenannies in the park.” 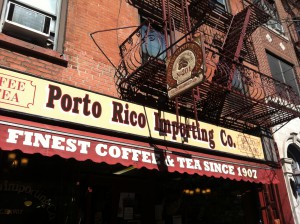 If you’re hungry or in the mood to shop, once you hit Bleecker Street, it’s a straight shot East to some of the best stores in the Village (and Manhattan). Start with Porto Rico Importing Co. In 1960 current owner Peter Longo’s parents bought the store, which first opened in 1907. The store had coffee from Puerto Rico, which Peter remembers was “highly prized at the time. The pope drank it.” 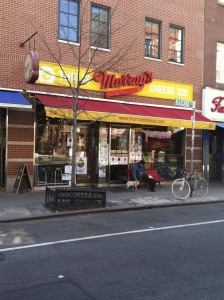 Your stomach might lead you down the street a little farther to Murray’s Cheese. Mario Batali often made a foodie pilgrimage here: “I’d pick up some nice ripe taleggio at Murray’s Cheese directly across the street. Right next door I’d grab a couple of still hot loaves of Zito’s poetic, sesame-coated ‘Italian bread.'”  Murray’s Cheese owner Robert Kaufelt bought the shop in 1989, with a “secret agenda” that had less to do with cheese and more to do with music. “As I came of age in the Sixties, at the height of sex, drugs, and rock and roll, it was always a dream of mine to inhabit the neighborhood where Dylan and others had tread, as if somehow their vibe might rub off on me,” he reflects. 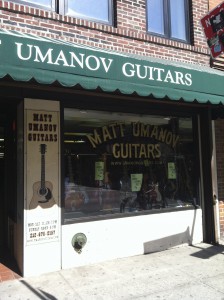 With a cup of coffee in hand, cheese to take home, and music on your mind, end your tour at Matt Umanov Guitars, one of the greatest guitar shops in the world. If you’re lucky, owner Matt Umanov will be in the store. He has a wealth of stories to tell about the many musicians who’ve frequented his famous shop, and one about the regular kid who didn’t know he was brushing up against greatness: “…In walked Bob Dylan, a sometime regular there. Without saying a word, Bob picked up a guitar and started playing with the kid…They never said a word to each other, just played together, and after about fifteen minutes the kid put down the guitar and left.” Matt remembers that later the same kid returned to the store bursting with excitement about a meeting a local celebrity when Matt explained to him who he had jammed with only a week earlier. “‘Do you know who you were playing with in here last week? That was Bob Dylan!’ And the kid says ‘Holy shit! And I thought those were my vibes!!'”